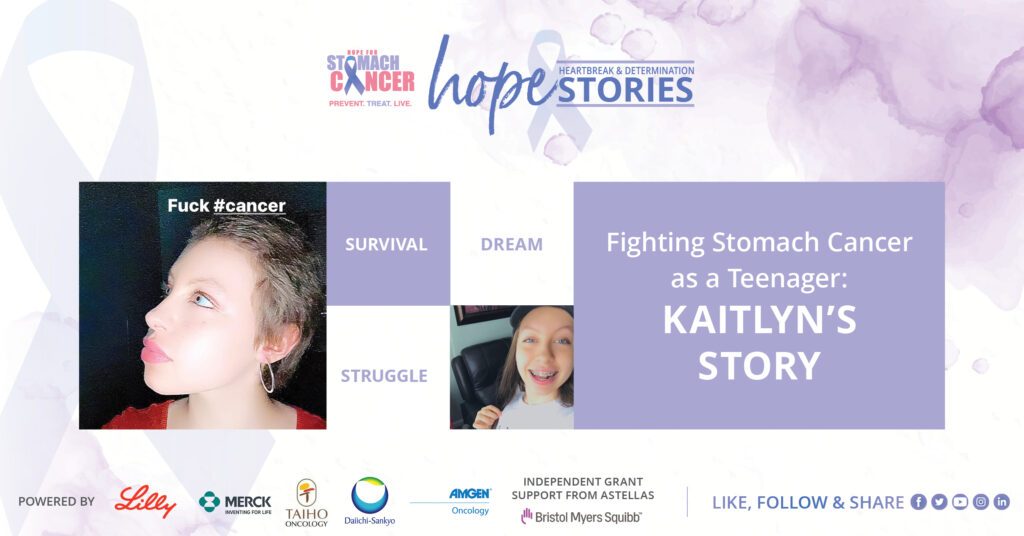 Hope for Stomach Cancer recently caught up with Liz and Orlando Mendoza, a New York couple whose 17-year-old daughter, Kaitlyn, passed away from pediatric stomach cancer in 2021. They speak openly about this heartbreaking loss as well as their experience through Kaitlyn’s diagnosis, treatment, and passing.

Q: Liz and Orlando, thank you so much for being willing to share Kaitlyn’s story with us. Can you please provide us with some background about Kaitlyn as well as how she received her pediatric stomach cancer diagnosis?

A: Kaitlyn was in her sophomore year of high school in March 2020. At the time, she was home pretty often due to COVID lockdowns. Kaitlyn excelled in school, and she absolutely loved to play tennis. She had a true talent for it – she represented Catholic schools for New York State and regularly competed in high-level tournaments.

When the lockdowns started, Kaitlyn still tried to get on the court as much as possible. We were living in an apartment in the city at the time, and Kaitlyn basically turned the unit into a home gym so that she could stay fit. Although she’d recently dislocated her shoulder, she was still doing her best to remain in shape.

I recall Kaitlyn telling us that she had some discomfort around her diaphragm as she was exercising. Naturally, we thought that she’d exerted herself too much or that she’d hurt herself in some way. I advised her to scale back her workouts.

Next, she began having acid reflux. This mainly occurred with specific foods, like pizza. Although she hadn’t had trouble with this before, I figured that she was becoming lactose intolerant or sensitive to fried foods. Following this, she had trouble swallowing her food. It was as if food got stuck in her esophagus as she tried to eat.

At this point, we needed to consult a doctor. I set up a Zoom appointment with Kaitlyn’s pediatrician. After discussing her symptoms at length, they recommended she come in for further evaluation. Ultimately, they referred her to a pediatric gastroenterologist. 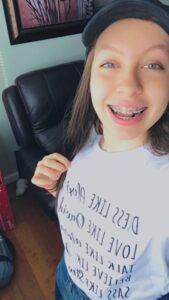 The pediatric gastro asked a bunch of questions and instructed Kaitlyn to come in for a swallow test. The results indicated that her esophagus was narrowing in an unusual fashion. They prescribed Omeprazole and instructed her to take this for a few weeks.

They also recommended that Kaitlyn have an endoscopy. After it was over, the doctor asked if we had a family history of cancer. I’d had breast cancer that was caught at stage 0 and treated with a lumpectomy, and one of my mother’s sisters had passed away from stomach cancer a handful of years ago. We didn’t make the connection at the time, but we were concerned when the doctor said that Kaitlyn’s stomach was flaky and bleeding. He described it as looking “shredded”.

A week or two later, we got the terrifying call confirming that Kaitlyn had stomach cancer. She was referred to Memorial Sloan-Kettering, and the surgeon there confirmed that it was Stage 4 Adenocarcinoma.

Q: It must have been an absolute shock to learn that Kaitlyn had pediatric stomach cancer. What did doctors prescribe for her treatment?

A: We were all stunned by the news. It didn’t help that the diagnosing doctor came across as insensitive. Here she is talking to a 16-year-old girl, and she’s showing her various papers and scans and keeps emphasizing the fact that she’s so far along. We were all quiet and devastated on the way home. We ended up seeing the oncologist moving forward. (I removed the work pediatric because she was being treated on the Adult side)

Kaitlyn’s treatments started with 4-6 rounds of these chemo regimens for her pediatric stomach cancer. She responded well to these treatments and found that she could eat again. A CAT scan at the end of these treatments revealed a better picture. At this point, the doctor saw an opportunity to introduce immunotherapy, so they put her on Nivoulumab.

Unfortunately, this was a poor choice. Kaitlyn had neuropathy, fevers, hives, and swelling when taking this medication. At first, the doctor attributed it to the platinum-based therapies in the FLOT, but that didn’t align with what we’d observed before. So, they recommended that we try a different approach.

Kaitlyn began a treatment regimen that included Fluorouracil, Irinotecan & Ramucirumab. This routine stabilized her, but it didn’t take long to discover that the cancer was still growing. We discovered the heartbreaking truth about the fact that doctors were just trying to buy her time – there wasn’t much that could be done to save her.

My husband Orlando began researching alternative treatments in earnest. She had adenocarcinoma, but she was negative for PLD1 and CDH1. Without these markers, immunotherapy may be helpful, but its effectiveness is limited. We kept looking outside of the box to find anything that might help her. 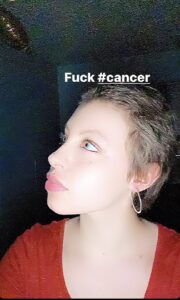 Kaitlyn had another scan in March 2021 that showed the cancer was spreading to her ovaries. There was a distinct tumor on one ovary, so we met with a female reproductive specialist for another round of scans, tests, and x-rays. We had to determine if an ovary removal surgery was necessary.

The surgeon made the procedure sound quite easy. They said they’d simply go in, remove the ovary, and help Kaitlyn avoid future issues with pain, obstructions, or bloating caused by this growing tumor.

They did the surgery on April 2, 2021. The surgeon told us there was so much cancer in her abdomen that it was tough to even locate the right ovary. But the procedure was successful, and they were able to relieve pressure in her abdomen by draining out excess fluid.

I recall that Kaitlyn felt amazing afterward. It honestly was a fun day; we were both so happy that she was feeling well. We went home and she enjoyed a delicious meal and settled in for the night.

Unfortunately, our peace did not last long. Later that night, Kaitlyn was nauseous and began throwing up. We woke up and hurried her over to Sloan, where they admitted her into the female reproductive department.

They gave her some medications, emptied out her stomach, and decided to place a DPEG tube to keep food moving out of her stomach. Normally, they place a DPEG to relieve pressure if you can’t keep your food down.

Once she stabilized, we brought her home. Frankly, we didn’t have much training on how to use the DPEG tube. We made some oatmeal, but this totally clogged up the tube. I recall being on the phone with the hospital desperately trying to troubleshoot the device. Truly, I thought she might die that day…she was pale and weak. Orlando was scared to take her back to the hospital; he felt she might never come home again. But we went, and they admitted Kaitlyn to the pediatric department.

This marked the beginning of a hospital stay that lasted from April 2021 until July 2021. All throughout, we tirelessly researched other treatment options to help Kaitlyn. Our searching led us to the Nagourney Institute in California, a group that specializes in customized cancer treatment plans. They proposed an alternative chemo course, which we presented to her oncologist.

It took some convincing, but they proceeded with the bespoke chemotherapy treatments for her pediatric stomach cancer. An incredible transformation occurred before our eyes. When Kaitlyn started the treatments, she had the DPEG tube along with a Tenckhoff catheter. It was a hallmark moment when, in July, the oncologist removed her Tenckhoff catheter and said that she could go home.

Kaitlyn was overcome with emotion upon returning home. She cried and felt a mixture of anxiety and excitement at being back. She still needed a lot of care, so we arranged for private-duty nursing. The night that she came back, she seemed a bit off. We chalked it up to nerves and the change of scenery.

When we settled into bed that night, Kaitlyn was having trouble sleeping. Early in the morning, she took some Benadryl to help her settle down. But minutes later, she had a seizure. Terrified, we had yet another moment when we thought we’d lose Kaitlyn.

We called an ambulance, and Sloan instructed us to monitor her. Four hours later, she had another seizure, so we rushed to the hospital. Inside the building, while sitting in a wheelchair, she had a particularly strong convulsion.

We were right around the corner from the ICU, so they pulled her in for immediate treatment. They did a CAT scan and a spinal tap. The cancer was in her central nervous system…this was devastating news. However, Kaitlyn did get to come home again. She was mentally slower after the seizures, and during the two weeks that she was home, she struggled significantly.

The cancer in her nervous system impaired her in various ways. It got to the point where her condition was too much for us to handle at home, so we took her to Sloan.

We weren’t thinking about death initially, but now we knew that Kaitlyn’s days were very numbered. She had remained positive and upbeat through so many challenges. She loved her oncologist and tried to do as much as she could despite her crippling condition.

Kaitlyn did remote learning during her junior year of high school and had a 99% grade average. She was a President’s List scholar, and she regularly insisted that teachers treat her no differently than any other student. There was no doubt that she was a fighter.

Our sweet daughter passed away on August 18th, 2021. The loss was absolutely momentous, and we are still trying to process it. It’s natural to have PTSD after an event like this. We can’t make sense of life without her.

Reflecting On Our Experience with Pediatric Stomach Cancer

Looking back, I see that Sloan was doing the best it could with limited information. They have excellent treatment rates for other types of cancer, but stomach cancer is especially deadly and challenging. It seems like major cancer centers often stick with their protocols and don’t think beyond these treatments, even if other options might benefit a patient.

Further, it didn’t seem like we had many guidelines or mentors throughout the process. I think about the fact that my daughter never seemed to receive good news about her pediatric stomach cancer, and it hurts my heart. Patients have to recognize how cancer can be different for every person, and treatment centers need to have the flexibility to take a personalized approach.

Q: I’m so sorry to hear about this heartbreaking loss. Kaitlyn clearly touched so many lives. What is your hope for the future?

A: We are still at the stage where it’s hard to feel a sense of hope. However, we do want to see more of a focus on treating pediatric stomach cancer and finding solutions. If the best minds in the world could focus on developing treatments, I believe we’d have answers.