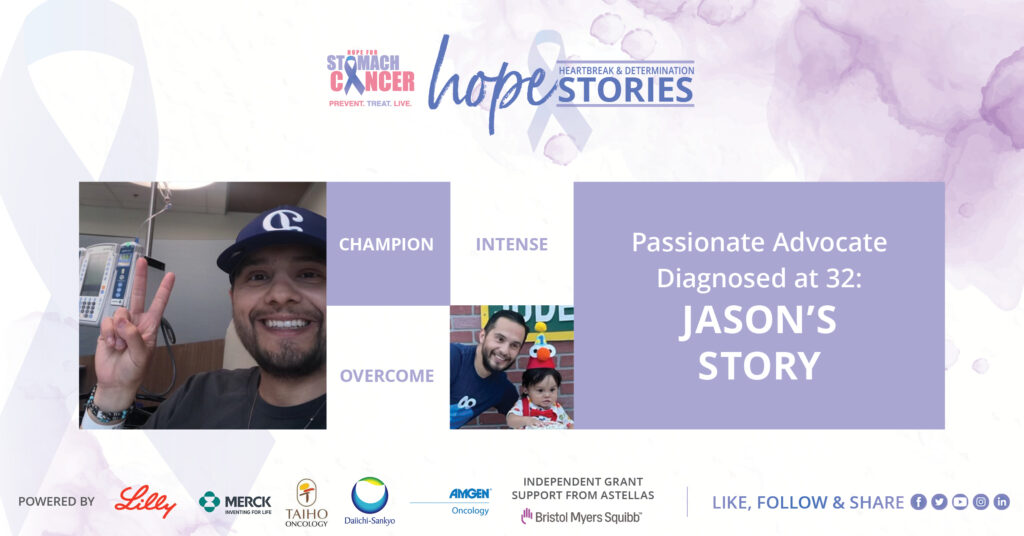 Jason Diaz received his gastric cancer diagnosis after years of troubling stomach and digestion problems that doctors initially identified as GERD. This is his story of hope. 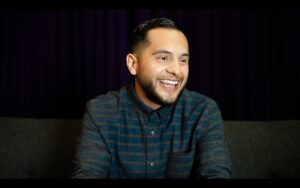 I was diagnosed in 2018 at the age of 32. It took years of enduring stomach pain while trying to get answers from doctors to get to this point. My symptoms first started in 2015 when my heart seemed to be acting erratically. I met with a doctor, who identified that I had a slow heartbeat, but didn’t find anything beyond that.

In 2016, I had debilitating heartburn. I loaded up on antacids and tried my best to live a normal life, but the pain interfered with my ability to function. At work one day, I was in immense pain – I collapsed and my esophagus burned as if it was on fire. My wife showed up and we went straight to the ER.

Getting a GERD Diagnosis

At the ER, the doctor quickly looked me over. “Does this hurt?” he asked as he pushed hard on my sternum. Of course, it was painful. When I said as much, he told me that I had GERD (gastroesophageal reflux disease). He gave me a medication and sent me on my way.

The meds helped, but they didn’t fully relieve the pain. And within a year, they were gone, and the pain came back more fiercely than ever. At this point, I made an appointment with my GP and spent a lot of time researching my condition. I was convinced that I had colon or gastric cancer, and I went into my appointment prepared to present my findings to the doctor.

A Lie That Saved My Life

The GP was skeptical of my self-diagnosis. Given that I was young and generally in good health, he figured that I had H.pylori or that the GERD was just acting up again.

Lying is against my nature, but in the moment, I did what I had to do. I told the doctor that I had black, tarry stool – a telltale cancer sign. I absolutely had to get a referral to a GI, and this seemed like my best shot.

Thankfully, I was able to schedule an appointment with a specialist to receive a consultation and endoscopy. Even the specialist wasn’t suspecting to find anything. As they put me under before the endoscopy, he said that he’d give me a call in a few days once my results were ready.

To my surprise, the doctor was sitting right next to me when I woke up. The scope had turned up something concerning. Finally, I felt justified in what I was feeling – you know when something isn’t right inside of your body.

A few days later, I went to my GP’s office, and he confirmed that I had gastric cancer. However, he could only see what was inside of my stomach – we still needed a CT scan to learn more about my condition. I began scheduling treatments at my local clinic, but I wasn’t comfortable with what I discovered. Their treatment protocols seemed out of date, and they weren’t very familiar with my diagnosis. So, I turned to City of Hope, a premiere treatment center for gastric cancer.

I did a lot of research and planning prior to starting my treatments. Ultimately, I felt I’d have the best shot by joining a clinical trial. I had four rounds of FLOT, a gastrectomy, and then another four rounds of FLOT after surgery. I also had immunotherapy (Keytruda) before and after. I was happy to participate in a trial that could benefit me as well as others through ongoing research.

I’ve had a lot on my mind since getting my gastric cancer diagnosis. Sadly, I’ve had some regrets, and there are relationships in my life that I want to mend. However, I have a lot to be thankful for as well – I have a lovely wife and a young son who always keep me going.

It’s important to advocate for yourself and remain aware of the latest treatments and procedures. Your doctors may know a lot, but at the end of the day, it’s up to you to push for the help you need.