The Inspiration Behind Hope For Stomach Cancer: Shigeo Tsuruoka Stage 3B 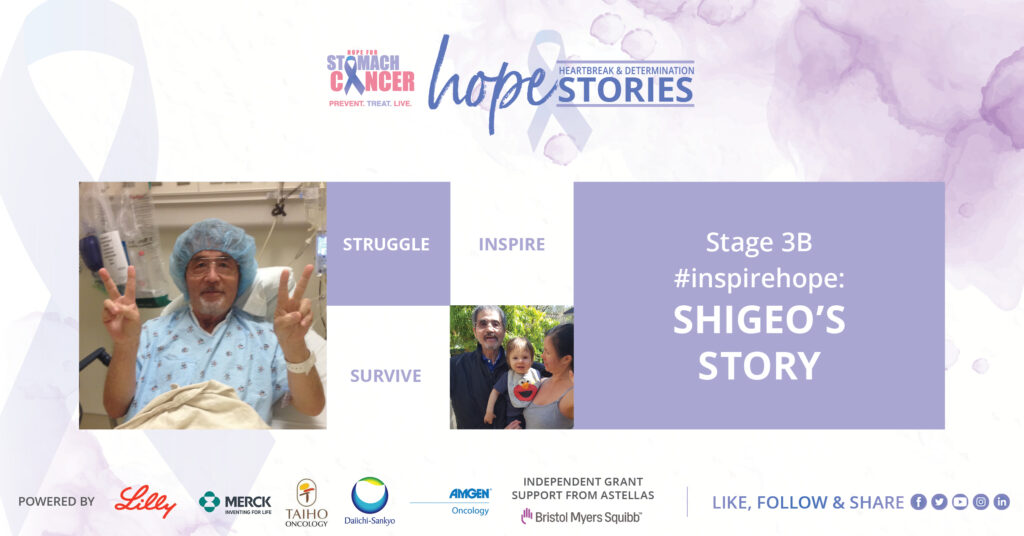 Aki Smith’s father, Shigeo Tsuruoka, was told he was Stage 4, but was restaged to  3B stomach cancer after surgery. Aki’s experience led her to start Hope for Stomach Cancer, which provides support and resources for others living with this diagnosis. 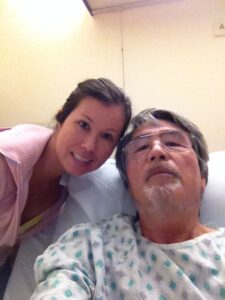 Hi, friends, my name is Aki Smith. I’m a caregiver to my father, Shigeo Tsuruoka, who was originally diagnosed with stage four stomach cancer. My father was actually told he had stomach cancer on Dec 6, 2013, but he spent the weekend at our local community hospital on Nov 15-16, 2013, where he was discharged with diverticulitis.

My dad’s diagnostics took place at the community hospital throughout December 2013 and January 2014. He did a PET scan, which showed high SUV up his digestive tract and neck lymph node involvement. He did many CT Scans which, and endoscopic biopsy with showed the cancer was in his GEJ and at the bottom of his stomach, and possibly his liver. The EUS was the worst, his tumor was 2.5 cm (already T4) and three lymph nodes tested positive.

I recall being shocked that he was stage four and only had one symptom – gastric bleeding. Further, the bleeding suddenly stopped, and we were nervous that the bleeding might begin again if we started chemotherapy. My dad’s community team of doctors were not optimistic that my dad would survive this cancer, and they disagreed on everything. 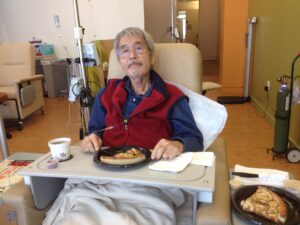 The constant disagreement was confusing and stressful. So, I switched his care to an NCI institution and this changed everything. We saw a glimmer of hope. My dad started his treatment with a total gastrectomy, where they re-staged my dad in order to get insurance to approve the surgery to stage 3b.

My dad’s tumor was 7.5 cm (it grew 5 cm in 6 weeks), and he had lots of lymph node involvement. The spot on his liver ended up being benign, so that was relieving news.. However, on day seven after reviewing the pathology, the surgeon came in and said they weren’t able to get clean margins during his surgery. Therefore, his risk of recurrence was very high.

That was my absolute low point. Why would we go through all this pain, stress, and effort for the cancer to come back? 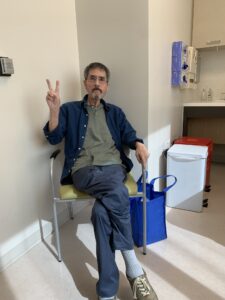 Thankfully, my dad’s second opinion oncologist was able to help. By some miracle, my dad got a targeted treatment called Herceptin because he was HER2+. This costs about $12,000 per infusion and is only offered and approved for stage four stomach cancer.

Next, my dad did 6 cycles of FOLFOX with many delays due to low white blood cell counts. Then, he had 25 rounds of radiation, and one year of targeted therapy. For the Herceptin, we had to see a breast oncologist because Herceptin is only given to stage 4 stomach cancer patients.

An Incredible Outcome For An Advanced Stomach Cancer Patient

My dad will be  9 years NED on November 16 – and cured! We donated my dad’s stomach for research—so there are things that we will never know, such as his MSI, PDL-1, or PCI score.

My dad and I struggle with guilt day in and day out. I will never know why a 71-year-old man survived this. He is in such a depression that he does not participate in my patient advocacy. In fact, he doesn’t like to share his story. Further, a few of his brothers had the h.Pylori bacteria and also contracted stomach cancer. I had h.Pylori too, which I eradicated in 2016 and reduced my chances of getting stomach cancer by 50 percent. Please visit my profile to see more about prevention and early detection.

My Advice To Others

After being in this space for 9 years, my advice is to hang in there and advocate for yourself. Do your research and join support groups. Hope is out there, and this diagnosis doesn’t need to be a death sentence – even if you have stage four stomach cancer. Hope For Stomach Cancer is always here for you. Thank you.