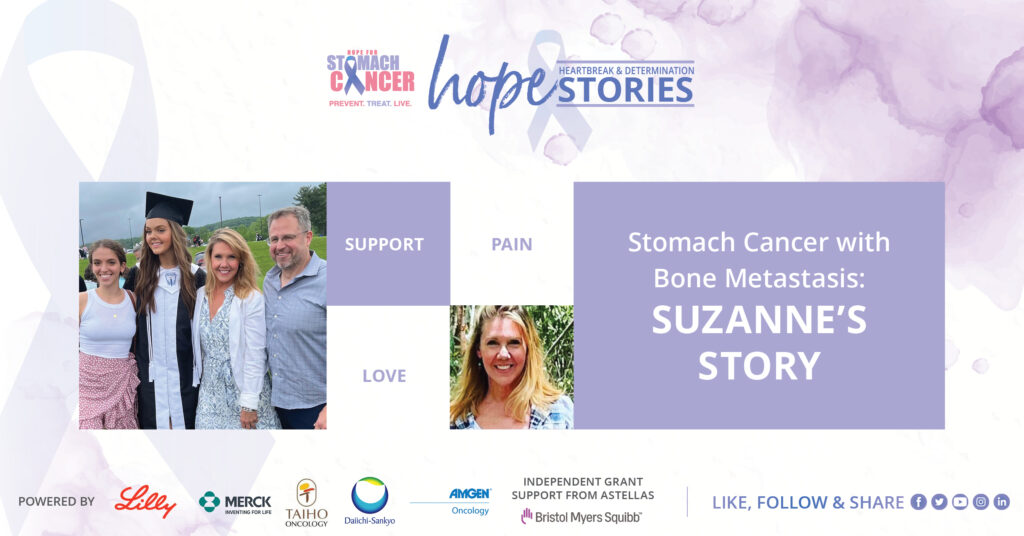 Suzanne Ottinger, a 51-year-old esthetician, was diagnosed with stage four stomach cancer in 2021. Other members of her family had appendiceal cancer, lymphoma, and melanoma, but the news still came as a shock. This is her story of perseverance and courage in the face of a daunting diagnosis.

Q: Thank you for sharing your story with us today, Suzanne. Can you please tell us about yourself and the story of how you got your stomach cancer diagnosis?

A: Last year, I celebrated my 50th birthday. Leading up to it, I’d struggled with stomach problems for several years. I had frequent stomach pains and I noticed that I’d get shaky after eating. Further, food was constantly getting stuck in my throat. Things with a doughy texture, such as doughnuts or chicken, wouldn’t go down – I’d just throw these foods up.

In 2019, these symptoms intensified, and I also had severe arm and shoulder pain. It got to the point where I couldn’t lift my right arm because of the discomfort.

Tests, Meeting with Specialists and Getting Answers

I went in for a routine colonoscopy and the doctor ended up recommending an endoscopy as well because of my stomach troubles. It didn’t take much digging to discover that I had a tumor in my stomach.

The scans showed that the growth was spreading aggressively; it had taken over my right scapula and we could see signs of it in my spine, hips, and other bones in my body. Suddenly the severe pain that I’d dealt with on the right side of my body was making sense. The cancer had essentially taken over my right shoulder and arm.

Next, I met with the oncologist. I had noticed some other strange symptoms, including numbness in my face and cheeks. They ordered a brain scan, but thankfully, the scan came back normal. I knew I had bone metastasis, but I figured I would be alright since I didn’t have signs of cancer in my organs. However, I was in for some tough news: the doctor told me that I had stage four stomach cancer.

Naturally, I asked when I would need to have surgery to remove the tumor. He told me this wouldn’t be an option – the cancer was everywhere. So, we’d have to consider other courses of treatment.

Q: Thank you for sharing this. What did the doctor prescribe as your course of treatment?

A: I asked the doctor the first question that came to my mind – how long did I have left? Of course, you expect with a late-stage diagnosis that your days are limited. However, he didn’t give me a definitive answer. He let me know that we’d start chemotherapy right away and monitor my body to see how the cancer responded.

They put me on Upto Fulfox along with a monoclonal antibody to treat the cancer in my bones. The doctors closely monitored the alkaline phosphatase in my blood since this biomarker was in the 500 range. Normally, the reading should be between 40 and 140. The doctors were concerned about my thyroid, so they referred me to an endocrinologist. However, I was not able to get in for an appointment. So we continued with the Fulfox treatments along with shots into my bones, which were especially painful and challenging.

In December, I had to visit the hospital because of neutropenia. This condition occurs when you lack neutrophils, a type of white blood cell. The visit was especially rough because my two daughters were sick at home with COVID and my doctor was out on a break, so I had to work with an on-call physician.

They tested me for everything under the sun and put me on a seemingly-endless course of antibiotics. This was unnecessary, and I developed thrush because of it. I had my pump with me in the hospital, and they didn’t want to give me my Neulasta (my medication to help my body produce more white blood cells. I had to fight for that, and they eventually gave in. Further, they did a scan that showed my cancer had concentrated in certain areas. There was a definition to the tumors instead of the web-like appearance that I’d seen before.

I discussed this with my doctor in January when he returned from his vacation. He told me this could be a good thing since it indicated the cancer hadn’t spread. However, I still had to keep up with my treatments to prevent more cancer growth. I need to complete eight more rounds between January and April.

My appetite practically disappeared during my treatments. I could tolerate cranberry juice and applesauce, but I didn’t eat much beyond that. However, being neutropenic and being on Neulasta prevented me from losing too much weight. I slept frequently during my treatments, especially toward the end. The last few treatments wiped me out. My daughters and boyfriend took care of me as much as they could. When I had to see doctors, I mustered the energy to get out of bed and put pants on – but it felt like a huge undertaking each time.

After many rounds of chemo, my body was battered. I had open sores on my torso, arms, and legs. I thought I’d be able to manage more rounds since I’m relatively young and healthy, but the doctor told me we’d need to take a new approach.

They switched me to capecitabine, a chemotherapy pill that I would take orally. Unfortunately, these pills made my mouth raw, and they caused extreme vaginal bleeding and rawness as well. The thrush was awful to deal with – I could barely swallow, and taking the pill interfered with my work as an esthetician since I could barely use my hands or feet. Further, I had issues with my kidneys, so being on the capecitabine was a challenge in general.

I felt noticeably different in the spring of 2022. Some of my energy returned, and I could eat and drink most foods and liquids without any issue. I was getting regular acupuncture, which also helped with managing my discomfort. Regardless, I was still fighting stage four stomach cancer, so I turned my attention toward other forms of treatment. I began researching clinical trials, and I took an interest in Chinese and holistic medicine. I’m careful about the foods I eat and the liquids I drink. I rarely have alcohol, and although I used to have a major sweet tooth, I only allow myself a bit of chocolate here and there as an indulgence.

My last endoscopy showed that my tumor is gone, although I still have an ulcer. This was a relief to learn.

As for my treatment moving forward, I see doctors at Hopkins, and I’ve been very impressed with their approach to my treatment. However, I still like to get second opinions, so I consult doctors at Frederick as well. It’s always helpful to have a second set of eyes on the treatment plan.

Q: You’ve already gone through much as a stage four stomach cancer survivor. What gives you hope, and what are your plans for the future?

A: I don’t want to die. Many people with stage four cancer don’t make it a year, so I’m thrilled that I’ve been doing well and have gotten the treatments I needed. I’m thankful that my doctors started treating me immediately with a mix of methods. Many people think they’ll do chemotherapy first and then immunotherapy, but you often have to try multiple treatments at once to fight cancer from all angles. So I’m extremely fortunate that my doctors took such a proactive approach.

Now, my doctors are telling me that I should relax and slow down – but I don’t want to do that. I’ve worked all throughout my treatment, and I continue to work now. Chemotherapy interrupted my schedule at times, but thankfully, my clients were accommodating and understanding.

Reaching this one-year milestone has been bittersweet. Hopkins originally gave me about two years to live, and I’m well into that now but still fighting every day. Thankfully, my body is responding well to immunotherapy, and I’m choosing healthy lifestyle choices that will make a difference in my future. I get scared not knowing what will happen. But I still live my life as much as I can – this year, I’ve traveled to Florida, the Cayman Islands, Philadelphia, and New York. I’m spending time with my girls, ages 18 and 21, as often as I can. Ultimately, life goes on, no matter what your health is like.

I hope we will get better at treating cancer as a chronic condition as opposed to doing these intense treatments that have such life-altering consequences. That is something that the entire cancer community would benefit from.