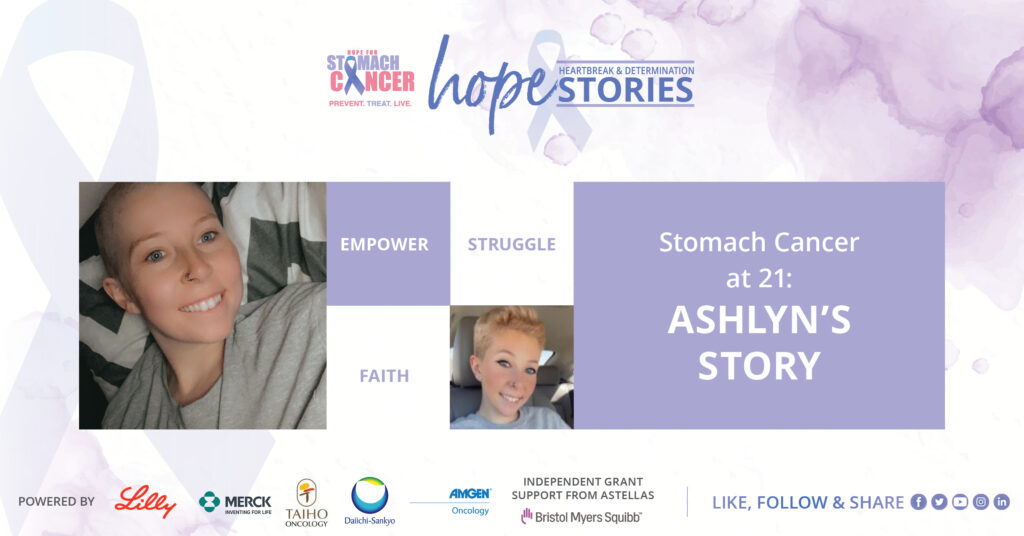 Hope For Stomach Cancer recently connected with Ashlyn Edwards, a 23-year-old survivor who received her life-altering diagnosis at 21. When Ashlyn received her diagnosis, she was at stage 3. She went through FLOT, had a partial gastrectomy, and then underwent a second FLOT treatment. After numerous setbacks, including extreme acid reflux as a result of her therapies, a two-month period of being Nothing by Month (NPO) due to a leak during surgery, and an emergency surgery to remove her feeding tube, she was declared No Evidence of Disease (NED) last year.  This is Ashlyn’s story of hope and healing.

Q: Hi Ashlyn, it’s great to meet you. Thank you so much for being willing to share your story with us. I’d like to start at the beginning – can you please tell us how you received your diagnosis?

A: I began having consistent stomach problems in my late teens. I frequently felt nauseated, and I had an ongoing burning sensation in my stomach that got worse with time. My doctors were aware of these problems and proposed solutions, but nothing helped.

Around age 19, I began throwing up a mixture of food and blood after almost every meal. I dealt with this discomfort and uncertainty for months until I hit a breaking point after a particularly awful night of vomiting. Despite feeling miserable, I went in to work the next morning and spoke with my supervisor about what I’d been experiencing. He actually required me to go meet with my doctor before I was allowed to come back to work! Knowing that I’d be jobless if I didn’t address my stomach problems, I pushed harder to get the answers I needed.

Stomach cancer: the diagnosis that no one suspected

I saw an urgent care doctor who then referred me to a GI, who performed a scope of my stomach. He discovered an unexpected tumor, so I was referred to another GI for further testing.

They were fairly certain that I had a GIST, but the new provider ordered a biopsy to be sure. Due to the positioning of the GIST, it was impossible to biopsy the actual tumor, so my pathology results were actually negative for cancer at first.

However, out of caution, the doctors advised me to have the GIST removed. My surgeon was also confident that it was a benign gist, so I was presented with an option: leave the GIST in and monitor it, or have it removed.

Thankfully, I proceeded with the removal. At that point, we discovered the GIST was cancerous, and I officially received my diagnosis of stomach cancer.

I remember receiving the news with my mom present. The two of us were in complete shock. I was 21. My thoughts had been occupied with planning for my future and enjoying life. The thought of a life-changing diagnosis hadn’t even crossed my mind.

Q: What is your stomach cancer treatment plan?

A: After discovering the cancer, doctors immediately began working out my treatment plan. I would need multiple rounds of chemotherapy, surgery to remove a portion of my stomach, and other therapies. Living in Rock Springs, WY, there weren’t many stomach cancer treatment options in my area. I ended up traveling to the Huntsman Cancer Institute in Salt Lake City, UT for the majority of my treatments.

Naturally, I was terrified at first. Thankfully, I had strong support from my mom, who regularly traveled to me from Texas while I was in chemo. My finacee also did everything he could to help me.

I had to start chemo during COVID, so that meant that I was mostly on my own while at Huntsman. The staff there was excellent; they gave me a private room for my first chemotherapy round and did everything they could to keep me comfortable.

Chemotherapy and surgery were a long, complicated road for me. Some providers assumed I would manage well since I was young and strong. However, I got a leak after surgery and was NPO for almost two whole months and had to have emergency surgery because of my feeding tube.

At 23, after a couple of years of frequent, intense treatments, I have fortunately been declared as NED (no evidence of disease).

Although the stomach cancer is gone, I am navigating new setbacks. I have debilitating heartburn as a result of chemo. We’ve tried upwards of 20 different medications to treat my symptoms so that I can function well. However, we still haven’t found the right fit yet.

Moving forward, I’ll have a stomach scan every six months for the next five years to make sure I’m cancer free. After five years, my scans will drop in frequency. I’ll always need to monitor my stomach health closely.

Q: What is your hope?

A: I am extremely fortunate to have received a stomach cancer diagnosis when I did and so thankful to have received the treatments I needed. Doctors generally don’t look at a 21-year-old and assume they have a terminal illness. Naturally, I wonder if things would have been different for me if I’d received my diagnosis earlier.

My hope is that providers will listen to patients who describe their symptoms and take them seriously, regardless of their age. I hope that patients of all ages will have the courage to advocate for themselves and voice their needs.