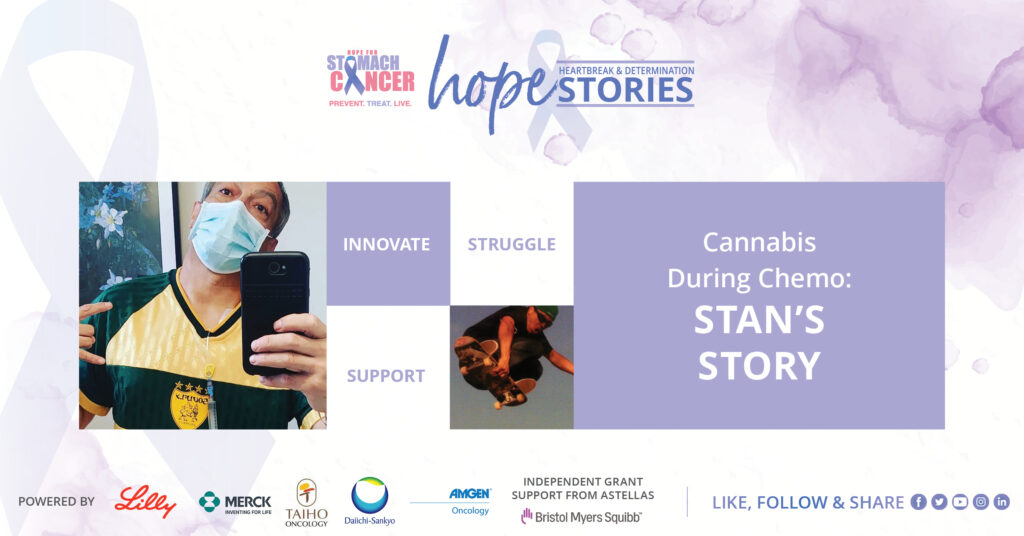 Stan Espinoza is a stomach cancer survivor from Albuquerque, NM. He used a combination of standard medicine and Cannabis-based products to help alleviate the symptoms of his gastric cancer.

Initially, I had some issues with my stomach that caused discomfort and affected my appetite. I thought it was an ulcer. However, I realized I needed to get medical help when I started to feel faint one day while driving.

I immediately pulled into a clinic to get checked out by the doctor. They recommended that I have a scope as well as an upper endoscopy to get answers about what was happening. We discovered that I was positive for the h.Pylori bacteria and also found that I had a mass growing in my stomach.

The Course of Stomach Cancer Treatment

My proposed treatment plan included four rounds of FLOT, a partial gastrectomy, and then more FLOT following that procedure. I met with the surgical oncologist, who pointed out that my cancer could be connected to the fact that I once was a heavy drinker. He noted that the h.Pylori may have played a role as well.

I managed my chemotherapy treatments as best as I could. I actually maintained my appetite all throughout, which is unusual for stomach cancer patients. Typically, patients lose a lot of weight and struggle to keep any food down. Meanwhile, I was still eating my favorite foods, which helped me maintain energy when I needed it most.

However, I had other complications, and I did end up in the hospital a couple of times because of that. FLOT is a challenging treatment that can have a serious impact on your body.

I had to drive myself to my treatments, and I remember that one day my car broke down as I was heading to the treatment center. So, I pulled my skateboard out and started skating. Someone noticed me along the road and gave me a ride. As I reflect on that, I think about how I’ve been skating for over 35 years, and I’ve always been able to fall and get right back up. Cancer is a lot like that – it makes you fall repeatedly, but you always have to pull yourself up again.

A surgeon in Albuquerque performed my partial gastrectomy, which was a success.

I followed my doctor’s advice closely and relied on the proven treatments that they suggested for stomach cancer. However, I also relied on Rick Simpson Oil, a cannabis oil mix invented by a person who used it to successfully treat his skin cancer. It’s not an official treatment, and the founder doesn’t actually sell it – but you can get variations of it at dispensaries. Initially I used my medical marijuana card to get products for nausea and vomiting, but it came in handy later for getting RSO.

My Hope for the Future

Truthfully, I try not to dwell much on the future and live as much as I can in the here and now. My advice is to enjoy the moment and be grateful for what you have, even if you’re struggling. Like everyone going through this, there are people and things that I want to fight for and live for. That’s what keeps me going everyday, despite the challenges of stomach cancer.