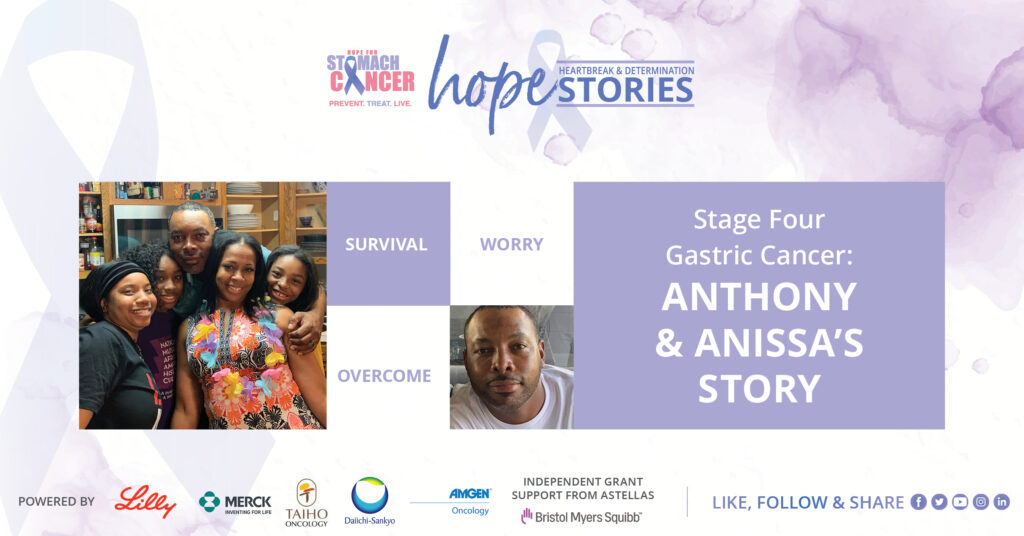 Hope for Stomach Cancer recently spoke with Anissa Bass, the wife and longtime caregiver of Anthony Bass. Anthony passed away on August 10th, 2022, after a long battle with stage four gastric cancer. This inspiring story teaches about hope after loss and enduring despite great obstacles. 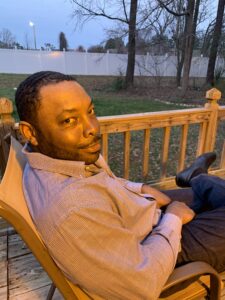 Q: Thank you for being willing to share your and Anthony’s story today, Anissa. Can you please give us some background about the two of you and provide insight into the events that lead to Anthony’s stage four gastric cancer diagnosis?

A: Anthony and I were preparing to celebrate our 20th wedding anniversary this year. We were married for the first time in 2001. We divorced in 2014 but remarried in 2018. Together we have three children, and Anthony has another son. We live in Charlotte, NC, although Anthony frequently traveled to Tennessee and Mississippi for work.

Anthony dealt with stomach problems for a long time. He was a stoic guy, and since he was often away from home for work, I didn’t quite know the extent of his struggles. He occasionally mentioned that he was uncomfortable, and I saw that he had lost a significant amount of weight. Further, he was frequently constipated and his bowel movements were unusually dark. At worst, we figured he had a lower GI bleed, but we knew that he needed some medical attention.

We saw doctors early on in hopes of getting answers. They gave Anthony everything from Prilosec to TUMS to treat his symptoms, and he completed all sorts of tests, assessments, and physicals. Yet we didn’t get a clear answer about his condition until doctors performed an endoscopy. At this point, he had bloody bowel movements and his bloodwork showed some deficiencies.

Q: It must have been jarring to receive such an unexpected and serious diagnosis. What did Anthony’s treatment plan look like?

A: We received Anthony’s diagnosis on May 7th, 2022. Of course, we were devastated by the news, and shocked that he was facing stomach cancer. Sadly, since he was in the late stages of the disease, we had limited treatment options.

We decided to proceed with a total gastrectomy – this seemed like our best chance for beating stage four gastric cancer. Anthony prepared himself well, and we went into the surgery feeling hopeful about the future. However, we were heartbroken to learn that the surgeon couldn’t proceed with the total gastrectomy. They discovered spots on the lining of his abdominal cavity. This procedure is so challenging and physically stressful that surgeons won’t proceed if they can’t remove all of cancer. So, they closed Anthony back up and told us that we’d need to consider different options. 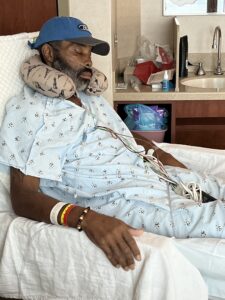 Next, Anthony had 10 rounds of radiation. He managed these treatments wonderfully. I had left my job and was acting as his primary caretaker at the time. We received the diagnosis on the same day that my daughter Natasha graduated, and she immediately turned her focus toward helping her dad. We faced some significant challenges, including bleeding issues. Anthony had over 30 transfusions during the time that he was battling this disease. Further, he had a rare blood type, so these transfusions were especially challenging.

Following the radiation, it was time for chemotherapy. Admittedly, I was quite nervous about it. Chemo is essentially poison; it kills off the bad cells that cause cancer but it also takes good cells in the process. Despite our concerns, we proceeded with the Fulfox treatment. Anthony looked really good after the first round – that was quite encouraging. He managed to complete a second round, but his situation worsened significantly after that.

Anthony was discharged from the hospital following his chemotherapy treatments. He was so excited to get home. However, his condition quickly deteriorated. He was throwing up blood and had black bowel movements again.

Next, he developed a blockage from scar tissue inside his stomach. It was a downward spiral from there. The blockage led to an obstruction, which caused nausea and vomiting, and ultimately led to his wasting away. Toward the end of his life, he was vomiting stool and losing weight dramatically. 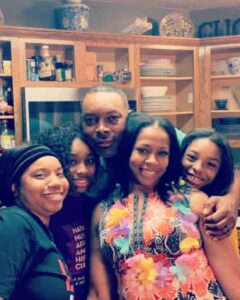 Scans around this point showed that stage four gastric cancer had spread to the lungs, bones, and liver. I learned after the fact that they had nicked his liver during surgery, and I couldn’t help but wonder if this had anything to do with cancer spreading there. However, at this point, we were trying to enjoy the time we had left.

I recall that toward the end of his life, he was in and out of consciousness. But at one point, he woke up and frantically wanted to speak with us. He talked clearly about seeing loved ones who had passed on. It gave us comfort to know that he wasn’t alone. On August 10th, 2022, at 8:40 in the evening, he passed away in my arms. My family was together when it happened, and he died peacefully at home.

Q: I am so sorry for your loss. You and Anthony endured so many challenges together. What gives you hope for the future?

A: This loss has been absolutely crushing for me and my family. Anthony was an incredible husband and father. The 10th of the month will always be a tough day. Further, December would have marked our 20th wedding anniversary, so it’s painful knowing that he isn’t here for that milestone. But, I still wear my wedding ring and love him as my husband. I don’t see him as gone; I believe I’ll be with him again…he has just gone ahead of me.

The kids and I are in therapy, and we find great comfort in keeping Anthony’s spirit alive at home. There are pictures of him in every room. He was cremated, and we keep his urn at home. We also have an altar for him. I’ve found other widows in my area who can understand some of my challenges.

As for my future goals, I want to shine the light as brightly as I can on stomach cancer. This disease can be prevented, but there’s very little that we can do if it’s caught late. I learned that stomach cancer is the third most common cancer in African American men. There need to be conversations surrounding this disease, along with screenings, tests, and every preventative measure that we can take. I am determined to make Anthony’s life and legacy count and to help others in any way that I can by sharing our story.