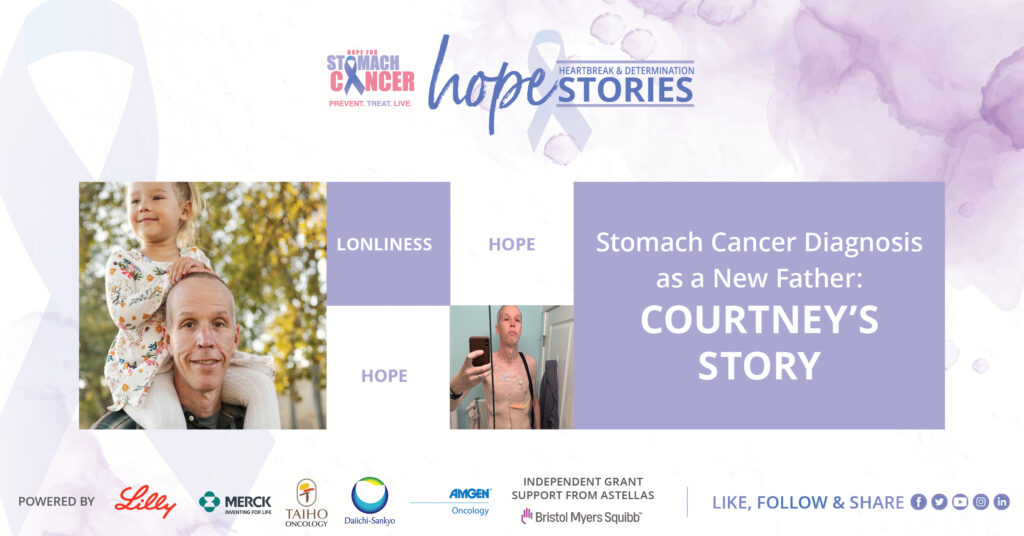 Hope for Stomach Cancer recently met with Courtney (Court) Nielsen. This San Jose, CA father underwent a total gastrectomy during COVID lockdowns following his stomach cancer diagnosis. His story teaches us about the value of willpower and the power of focusing on the people you love during your treatment journey.

Q: Hi Court, thank you so much for being willing to share your story with us today. Can you please tell me a bit about yourself as well as your stomach cancer diagnosis?

A: Yes, I live in the San Jose area with my wife and 5-year-old daughter, Lucy. I’ve always been an active and athletic person. In 2020, I was getting ready to head into my 50s. I generally felt well, although I was dealing with the challenges of being a new father to a young child.

As any parent knows, caring for a baby is exhausting. After my daughter was born, I frequently felt fatigued. My strength and focus diminished, and I dealt with frequent bouts of physical illness. When I wasn’t throwing up, I was resting in bed, fighting off a host of mental and physical challenges.

Since my initial symptoms coincided with my daughter’s birth, I was tempted to write them off as some form of postpartum paternal depression. But after several visits to the local urgent care, a nurse there mentioned that I probably should visit with a GI doctor to rule out anything life-threatening.

Doctors in Silicon Valley are used to seeing people with all kinds of odd physical symptoms due to stress. Although I worked in the tech scene myself, I was skeptical when the GI doctor I visited wrote off my symptoms as being stress-related. Everyone here is stressed! Yet I didn’t know many people who were falling ill every few weeks and struggling with the same symptoms that I had.

After this meeting, I abandoned the GI route and focused my energy on making lifestyle changes instead. I tried all kinds of diets, including paleo, autoimmune paleo, and keto. I eliminated every bad food from my diet and paid close attention to my body to see how it reacted.

I inevitably followed the same cycle. At first, I’d feel great, and my digestion issues would diminish as I pursued a new diet. But, within a few months, the uncomfortable symptoms would return. Further, I was losing weight at an alarming rate. Food seemed to flow through me without providing my body the nutrients that it needed.

The Carnivore Diet & My First Endoscopy

Finally, I decided to give the carnivore diet a try. This diet is almost completely focused on consuming meat. I had the best outcome with this diet; I felt well for about six months. For a time, I honestly thought I’d discovered the problem.

However, my relief didn’t last. I soon found myself in pain again. And this time, the symptoms were different: I had round-the-clock heartburn, bleeding, and just felt awful in general.

At this point, I’d visited with a preeminent GI doctor at Stanford, but I still didn’t have any satisfactory answers. With these new symptoms, my primary care doctor urgently referred me to a GI doctor on a different network.

The possibility of a stomach cancer diagnosis wasn’t even on my mind at this point. However, the doctor ordered an endoscopy, which revealed some abnormalities. After further investigation and an ultrasound, he determined that I had a well-differentiated cancer growing in my stomach. The invasive growth was a sight to behold since it had tendrils, nodes, and a clearly defined outline.

The reality of my diagnosis sank in as I thought about what I’d learned so far. There was the cancerous growth, along with my painful symptoms, which had persisted in some form or another for six years by this point. Further, 85 percent of my stomach lit up during a PET scan. I was bracing myself for an advanced cancer diagnosis.

Unbelievably, testing showed that I was only at stage 1. I was grateful for this news, but I still had a long road to recovery ahead of me. The doctors told me I could beat this – and I held onto that knowledge as I started this wild ride.

Q: It must have been very surprising and scary to receive that news. Can you tell me what types of treatments the doctor prescribed?

A: The cancer was too rare for this smaller medical group to treat, so I found myself back at Stanford. My treatment included several rounds of FLOT, then a gastrectomy, and more FLOT after that. Initially, the doctors thought that I’d be okay with a partial gastrectomy. However, given the growth of the cancer and the fluid buildup, they recommended I proceed with the full removal of my stomach.

I immediately got my port and started my first FLOT treatment. The FLOT treatments were miserable. I ended up in the emergency room a couple of times with some awful side effects. First, I had severe headaches, which doctors traced back to the white blood cell booster in the treatments. Next, I had a highly unpleasant visit to clear out an intestinal blockage.

Additionally, I had lymphatic edema, which caused severe swelling in my legs and feet. The treatments also caused permanent nerve damage that I’m still managing to this day.

Toward the end of 2020, my surgery loomed in the distance. I prepared myself by enjoying life as much as possible. I ate 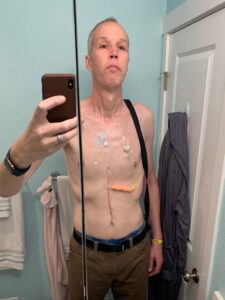 constantly to pack on weight and enjoyed my free time since I wasn’t working by that point. Overall, I felt a bit better since I wasn’t actively doing the FLOT treatments for my stomach cancer diagnosis.

I vividly recall walking into the surgery center on the day of my procedure. California was still in lockdown due to COVID, so the cavernous building was practically empty. My wife, Carmen, had dropped me off. She was not even allowed to walk me to the desk, let alone visit with me while I was there, which was very distressing to us both. The fear and stress sunk in as I stood alone in the building. My 50th birthday was about to take place,  I had a young daughter at home, and I was heading into a major procedure with an uncertain outcome.

For weeks, I’d been tormented by this awful nightmare where I saw Lucy falling in the darkness, screaming as she plummeted into nothingness. I spoke to the chaplain before my surgery, and he told me that I needed to keep myself out of that darkness to prevent Lucy from going there. To me, this meant that I needed to be mentally strong for my family. I went into the procedure laser focused on surviving for the sake of my wife and daughter.

I woke up eight hours later. Thanks to an incredible medical team, the surgery went smoothly. Now, I needed time to recover. I was on morphine for a couple of days. My time in the hospital was lonely. I only saw nurses a couple of times per day and entertained myself by watching TV. At one point, my potassium levels dropped dangerously low, so I had to receive an IV. Pure potassium causes an awful burning sensation, so that was extremely unpleasant. But overall, I was doing well – I passed the swallow test and didn’t have any complications after eating a meal.

Finally, I returned home for the rest of my recovery. I was bedridden for the first month and couldn’t eat much. My routine consisted of drinking as much liquids as I could and walking occasionally to get some exercise. During this time, my wife worked, took care of our daughter, and ran the household so that I could focus on recovering. Carmen also had to treat me, injecting me once a day in the belly for 30 days with an anti-clotting agent. I was amazed with the way she handled everything.

My FLOT treatments resumed after surgery. It was harder to recover from the FLOT side effects after the total gastrectomy. I spent a lot of time just figuring out how to function again. Thankfully, I had great friends who brought me foods that I could eat and supported me.

The good news is that I was declared cancer-free after going through my treatments. The doctor also encouraged me by saying that despite the cancer, I was one of the healthiest patients he’d ever seen. He even had to verify he was working on the right patient once the surgery began because no cancer was visible in my stomach after the FLOT treatments! As I reflect on all that I went through, it seems the keto diet may have stopped the tumor from growing as quickly as it could have.

Life After the Stomach Cancer Diagnosis

Life is certainly different now than it was before. Physically, I am still low on energy and thin – my optimal weight is 220, but I’m currently 155. I focus on eating as much as I can and exercising when possible, although the neuropathy has impacted my routines. I’ve tried a variety of medications, and one of them triggered painful “brain zaps” that felt like electrical shocks inside of my head. That set me back for several weeks.

I’m still careful about what I eat. After all, my digestive system is a bit like an old-fashioned car with a choke! I can hear each piece of it working as digest food.

Regardless of the challenges, I’m grateful to be with my family, and thankful that I received the care that I needed.

Q: Thank you for sharing your incredible story with us. What is your hope moving forward?

A: My hope for the entire stomach cancer community is that new technology will allow for earlier detection and prevention. It’s upsetting to see anyone battling cancer, but it’s heartbreaking to see children’s lives that are upended by a stomach cancer diagnosis. I especially hope that new technology can help people with genetic variants of this disease. Entire families, including children, often have to face this.

Personally, I want to do whatever I can to maximize time with my family. Seeing my daughter grow is wonderful, and I hope to be on this earth long enough to raise her to adulthood.