My Dad Had COVID19

Thank you so much for the positive energy and love we received these past few weeks. While my dad is not completely out of the woods, I am confident that we have avoided a hospital intervention which would have been the worst-case scenario. My dad is almost 80 years old, he has survived stomach cancer but dealing with the toxicity that treatment caused. He is my hero and inspiration in the work I do every day. It’s guaranteed that he will die someday, and all we want is the ability to give him comfort, love, and family during that time. (Which would not be possible in the hospital during a ranging pandemic).

On Jan 3, 2022 – my dad tested positive for Covid19 with an antigen test. We knew this could happen as our family tested positive almost a week prior and so did my mother, who lives with him. When we all tested positive and my dad negative, I had contacted all my dad’s medical providers to inform them of the exposure.  We did absolutely everything in keeping my dad safe short of transferring him to a hotel. We didn’t want to put him in a hotel because what if he already had it and nobody was checking on him. Instead, we got him a medical-grade air purifier, an oximeter, high-grade vitamins (such as vitamin D), surgical masks for common areas, and separate quarters. And then he still tested positive 5 days later.

My mom suspected he had COVID19 in the middle of the night when she heard him struggling to walk to the bathroom. He fell several times and was so extremely weak. By 8:30 am that morning we had a telemedicine call with an Internalist. The doctor went over his allotted time and was convinced my dad had COVID19. (My dad not so much). The doctor put in an order for a PCR test and monoclonal antibodies infusion. However, the outpatient clinic needed a PCR test to proceed with scheduling. I spend the next few hours trying to get a PCR scheduled for my dad. Los Angeles was a mess! Even with a medical prescription, I couldn’t find anything until 5 days out. Thankfully, the doctor called me privately on his lunch break and we brainstormed on what we could do for my dad.

At 11:30 am, despite having COVID19 myself, I drove over to my parents’ house to test my dad with an antigen test. UCLA said they would move forward with a positive test antigen and bend their rules about having to have a positive PCR test. Within seconds, my dad’s test showed, he was positive. I cried.

By the afternoon, my dad’s medical group, UCLA, had set him up with an outpatient infusion center about 30 minutes away from his home. He would start the next day.  I felt so relieved that we had a plan.

On Jan. 4, I went to pick up my dad. His COVID19 symptoms were so mild, I questioned whether we were doing the right thing with going through with this treatment. It was emotional because then I remembered when my dad was diagnosed with stomach cancer in Nov. 2013. His symptoms for stomach cancer were so mild and yet his cancer was so advanced. It’s so hard making big decisions with such little available information. I remember my dad questioning his team of medical doctors, hoping and praying that maybe he was early stage. But he wasn’t. He was advanced.

And COVID19 is no different. At what point do patients make a turn for the worse? Our PCP said to watch out for severe inflammation phenomenon that can happen between day 7 to day 10.  At the infusion center, I realized that the risk to find out wasn’t worth it. I let the infusion center know that my dad was in the parking lot. They said “great, go on in”.

Inside the infusion center, it was really, really cold. The infusion chairs looked so similar to the oncology infusion center except the nurse and tech didn’t want to chat, cuddle or spend any additional time with us. They gave my dad a chair, took his vitals, inserted a PICC line, and didn’t come back until his medicals from pharma arrived. (which on day 1 was over an hour and a half wait). I had to take care of my dad. I brought him a blanket and adjusted his seat to be comfortable. I asked if they could hydrate my dad and they said no.

This was the process for 3 days.

Jan 6. Day 3- My dad received 100 mg of Remdesivir. We had a new nurse and tech. They were very thorough in having my dad stay an entire hour for observation.

In total, my dad’s symptoms were very mild. Besides the muscle weakness, he also had a cough and extreme nausea. My dad lost 5 lbs. He went from 103 lbs to 97 lbs. I’m thankful to his team for moving quickly and creating a plan. The outcome could have been terrible and devastating.

I had to cancel going to GI ASCO because I couldn’t risk being away from my dad during this critical recovery time. But I am happy to report, my dad is finally on the up and up. He gained a pound and is 98 lbs.

So– thank you to you all for all the well wishes.

Be Safe Out there! 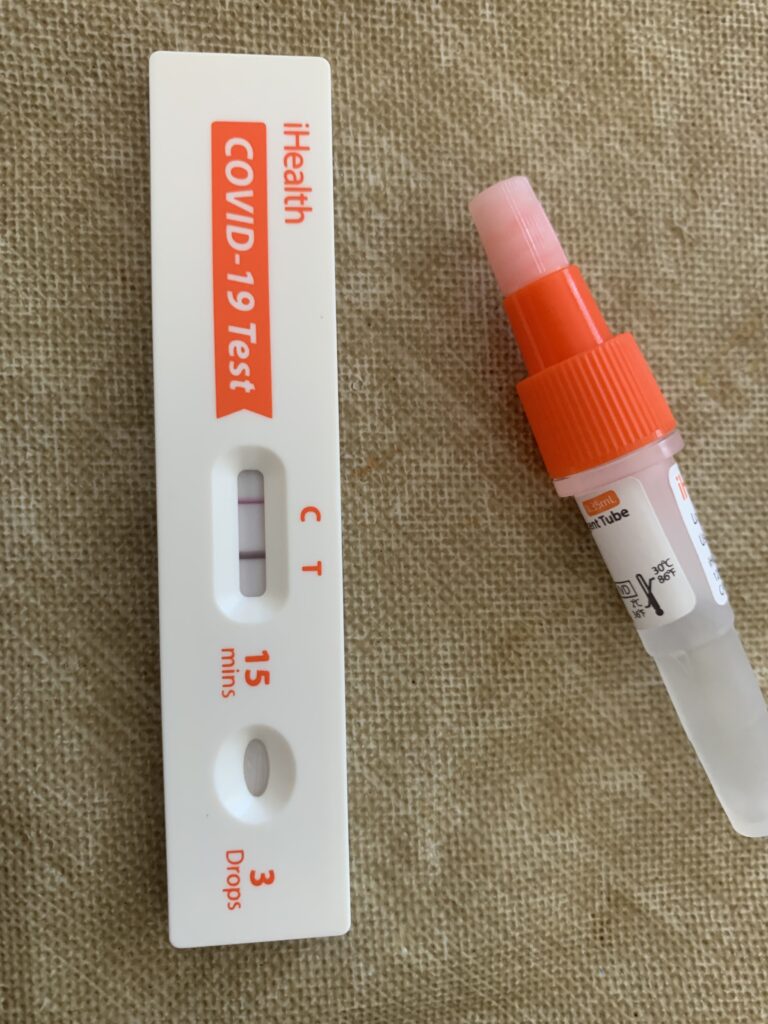 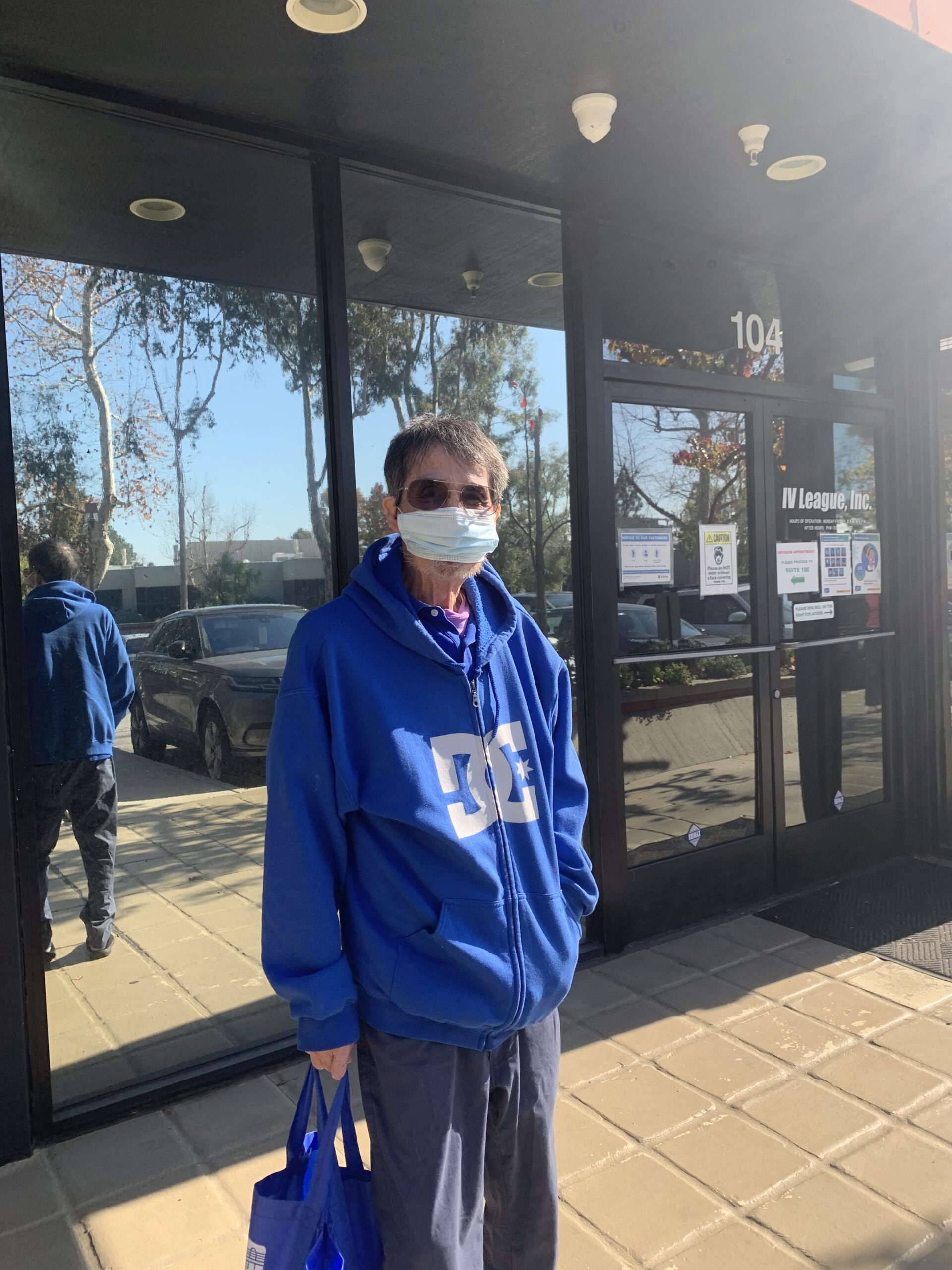 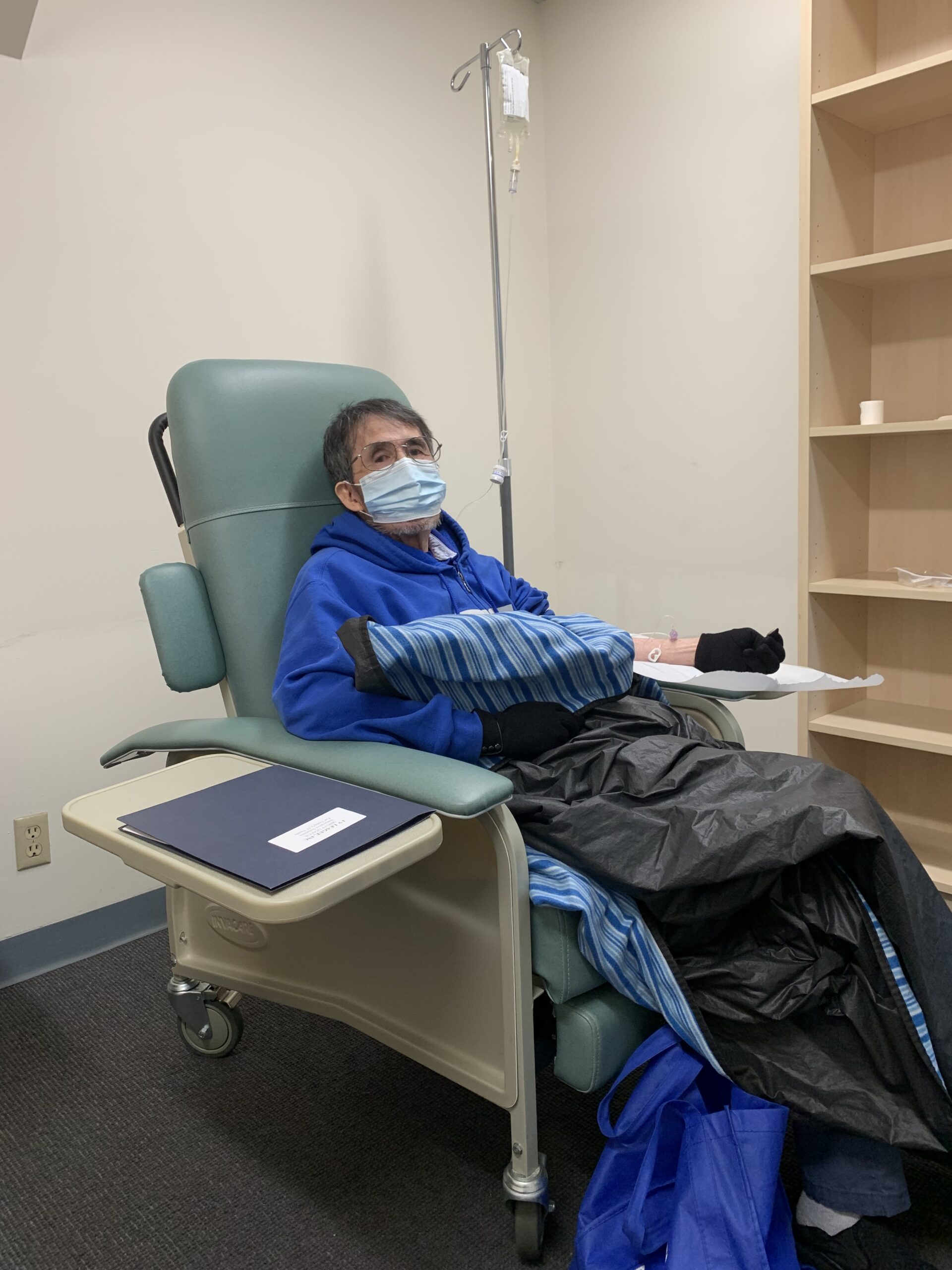 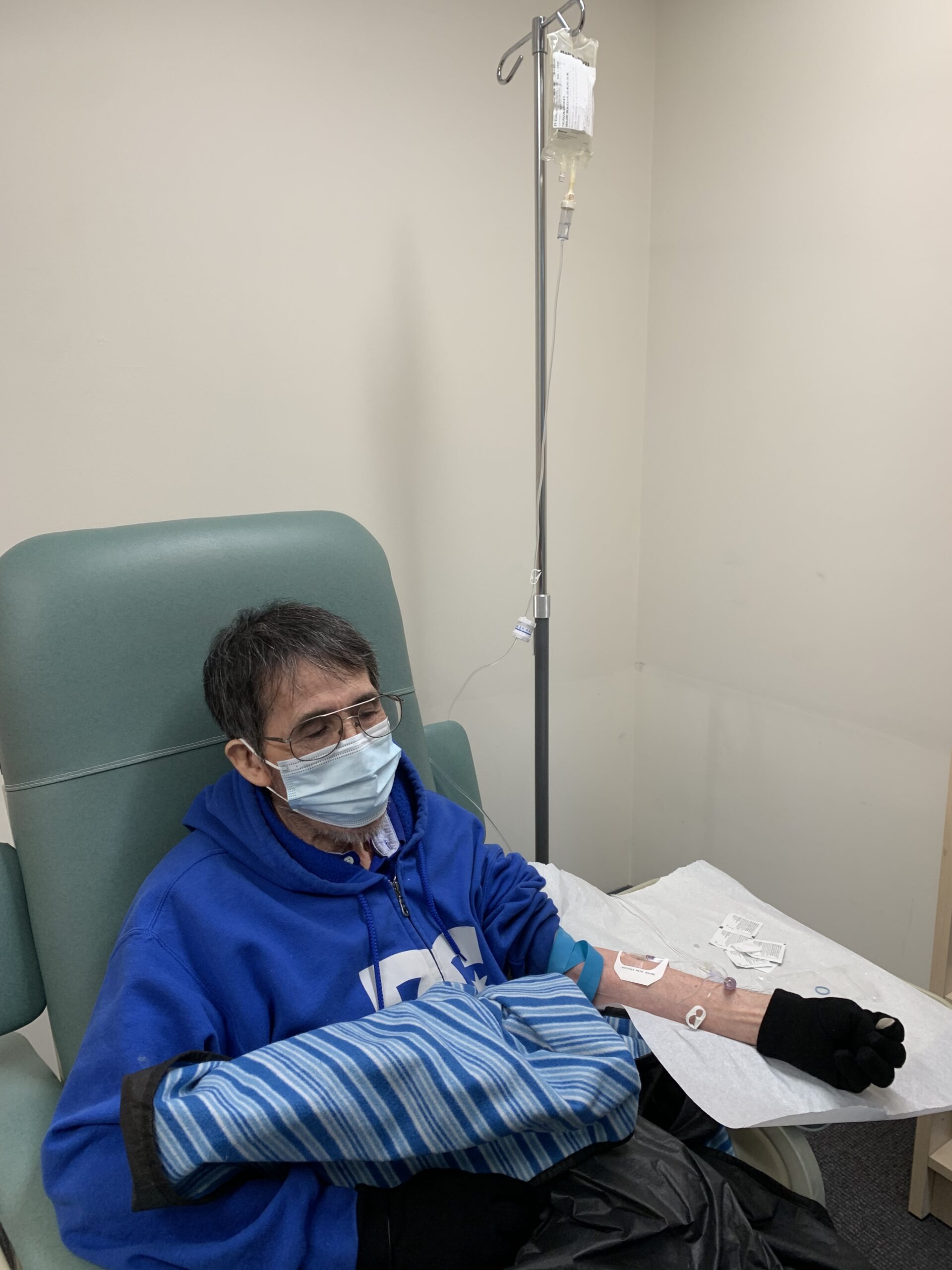 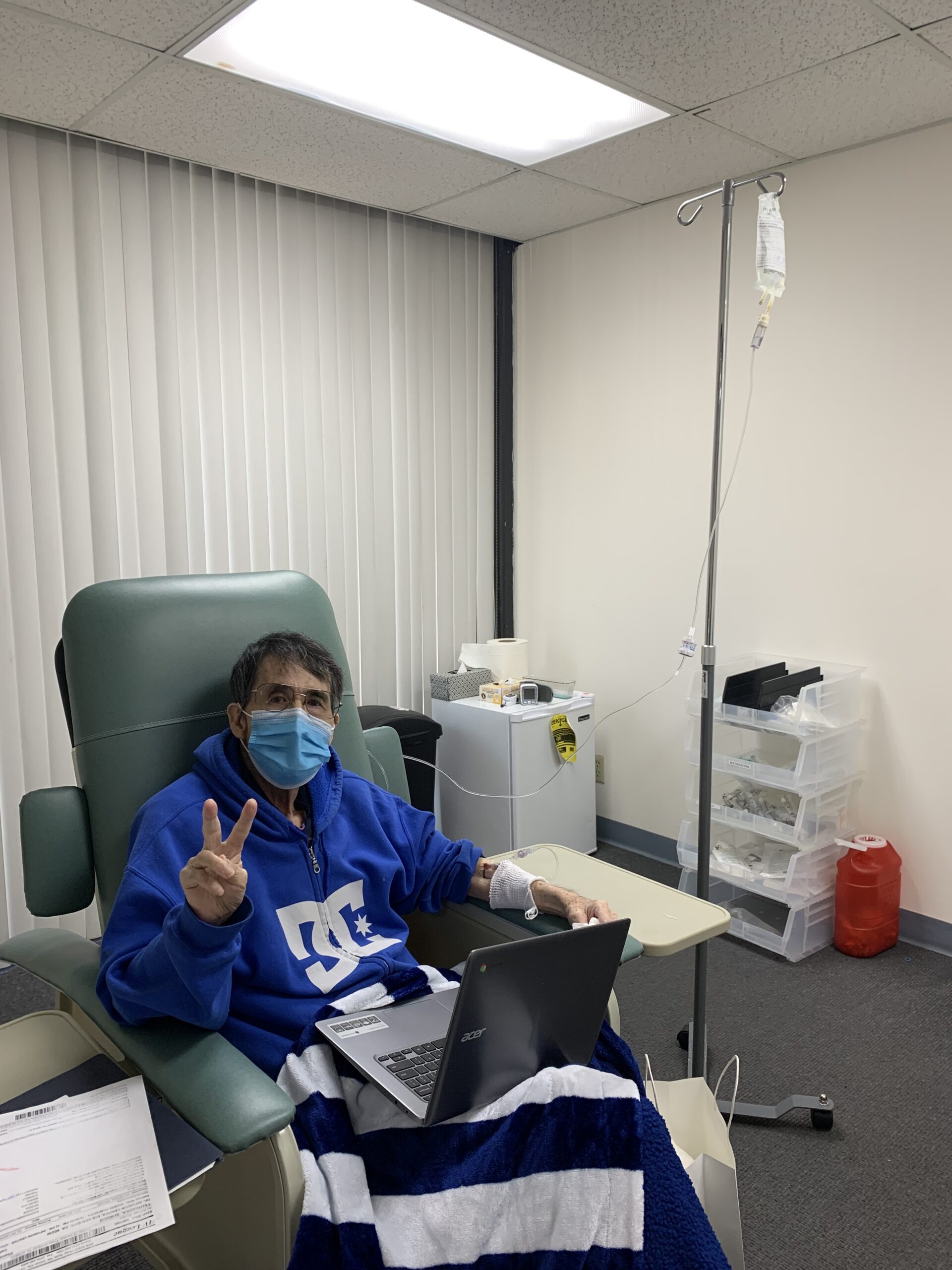 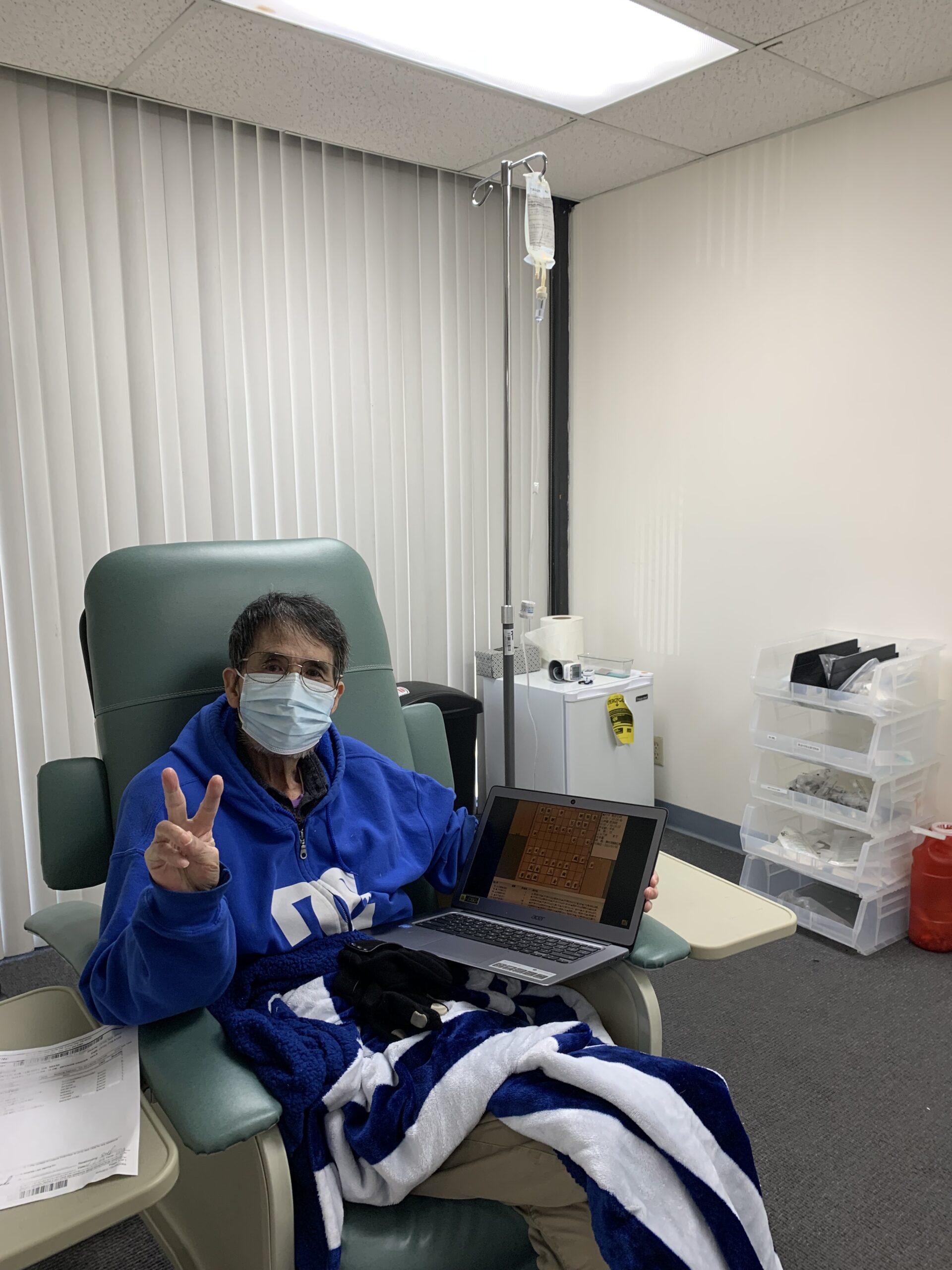 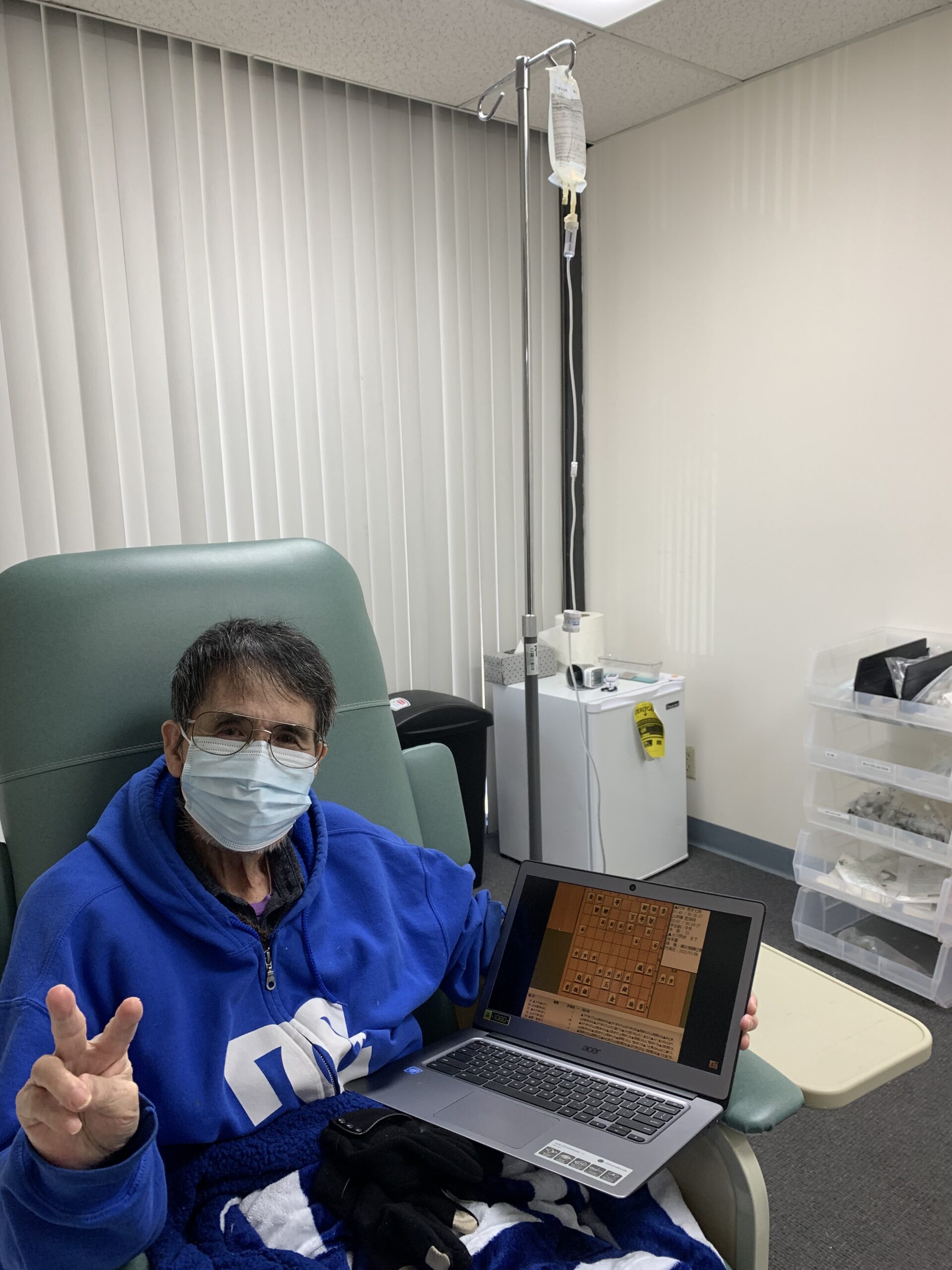