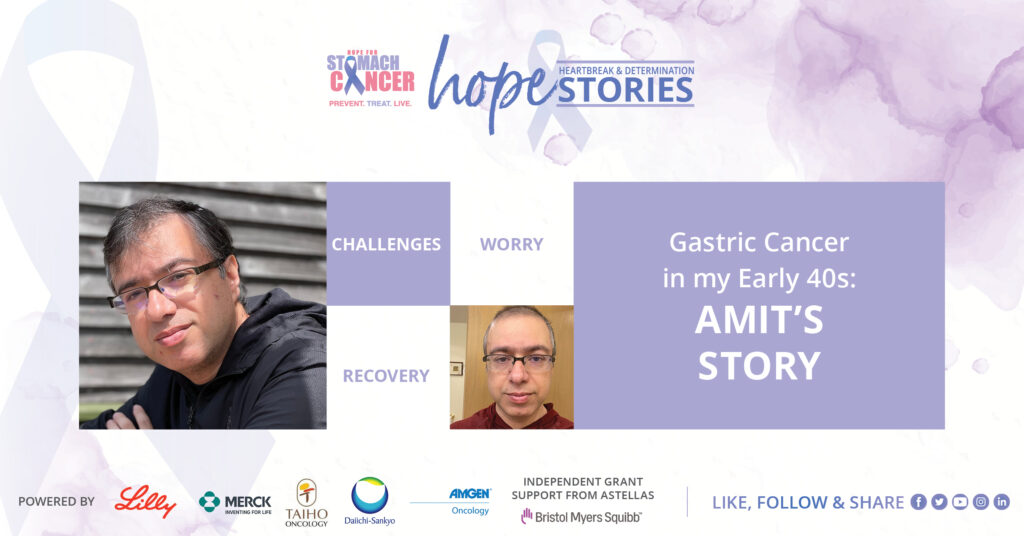 Amit is a gastric cancer survivor living in Washington State. He learned about his diagnosis after testing positive for the H. pylori bacteria. This is his inspiring story of perseverance and recovery.

Q: Thank you for sharing your story with us, Amit. Can you please tell me about yourself along with how you received your gastric cancer diagnosis? 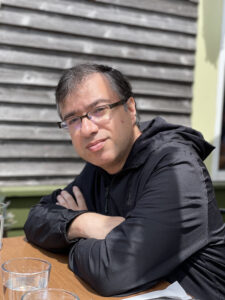 A: I was born and raised in India and then moved to the US about 15 years ago. In the fall of 2020, I began having some strange issues with acid reflux. My primary care doctor prescribed omeprazole to help with the discomfort. I took the medication consistently for a few months until the doctor recommended I go off of it to see if I still had reflux.

I stopped the medication in early 2021, and the acid reflux returned with more force than before. It was so awful that I had to go to the emergency room. Around the same time, I also noticed that my stool was black. The emergency room doctor recommended that I start taking Omeprazole again and suggested that I see a GI doctor.

Meeting With the GI Specialist

I set up an appointment with the specialist in February 2021, and they recommended I have an endoscopy. Endoscopy revealed that I had H. pylori, a common bacteria that most people are exposed to at some point in their lives. The doctor prescribed me antibiotics for the H. pylori and instructed me to return for further testing in a few months.

Getting My Gastric Cancer Diagnosis

For a while, I continued taking Omeprazole and managing my symptoms. However, I returned for another endoscopy in July 2021. We received the results in August 2021, and I was shocked to find out that I had gastric cancer.

Outside of my challenges with acid reflux, I was quite healthy – I was running at least two miles per day and maintaining a healthy diet. I had lost a bit of weight, but I figured this had to do with the medication I was taking.

Immediately, I dove into research to determine what this diagnosis meant for me. It was highly concerning given the statistics – most people who have gastric cancer don’t discover it until they’ve reached the late stages, and at that point, there’s only so much that doctors can do.

I reflected on the fact that I was fortunate we detected the cancer. I was supposed to have a breath test that didn’t work out, so the doctor recommended a second endoscopy instead. If he hadn’t brought that up, I wouldn’t have learned about my diagnosis.

Q: Wow, it’s pretty incredible that they were able to detect the cancer when you weren’t planning to have another endoscopy. What did doctors prescribe as your treatment?

A: I chose to get treated at Fred Hutchinson Cancer Center. The doctors were very nice and attentive. I worked with a GI cancer surgeon and a GI oncologist. The surgeon did a laparoscopy and determined that I had stage 3 cancer with clear margins. My treatment plan would include the standard FLOT chemotherapy, a gastrectomy, and then more FLOT chemo after that.

FLOT was very challenging. It made me quite tired for a few days, and I had neuropathy in my fingers. My fingernails blackened and I lost my hair.

Naturally, I was concerned about having stage 3 gastric cancer. But I felt I had a good chance of beating it. I finished my chemotherapy and then went in for my gastrectomy in 2021. Sadly, we discovered that the cancer had spread into the lining of my stomach and the gastrectomy was aborted. This was upsetting news, and it meant that I had basically entered stage 4.

I have two young children and I felt that I needed to know what my future looked like. So, I asked the doctor point blank about my chances for survival. He said that based on the statistics, I would have 10 to 12 months to live.

Even with this bleak information, I knew that I couldn’t give up. My family and wife were relying on me to fight gastric cancer as much as I could. Now, it was time to consider other treatments so that I could maximize my chances of survival.

I knew that I didn’t have much time – my cancer was progressing quickly, even during the chemo treatments. So, we changed my Chemo drug regimen to FOLFIRI and added immunotherapy at the end of last year. What made this hard was that I now had to keep my Chemo pump running for 48 hours at a time. I learned how to sleep and move around with it as best as I could.

We also did a bunch of genetic tests to see if I had any specific biomarkers that would be helpful in fighting the cancer. None of these came back positive except for PDL1.

For six months, I did chemo and immunotherapy every two weeks. My scans looked cleaner and more encouraging. Since I was stable, we started looking into a total gastrectomy and HIPEC surgery. My sequence of approaching the cancer was unconventional, but I’m still comparatively young – in my mid-40s – and I wanted to be aggressive with my treatment.

We did another laparoscopy to see how things were looking. Thankfully, the chemo and immunotherapy seemed to have a positive impact. The surgeon gave me the option to pursue the gastrectomy, and I went for it. 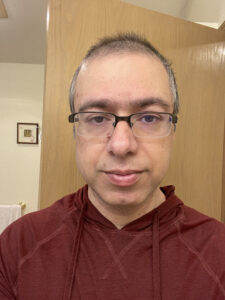 I had my surgery and HIPEC procedure in July 2022. I spent a week recovering in the hospital, and the last scan after my surgery looked great. It was hard to bounce back at first, but so far I am recovering well. Gaining weight is a challenge and eating with a feeding tube was particularly tough at first.

My life has some sense of normalcy now. I can exercise again and I continue to work from home. I’ve been off of all my treatments since July, and I’ll be seeing my doctor for another scan this month to see if other treatments will be necessary.

Q: You’ve been through some extreme ups and downs since receiving your gastric cancer diagnosis. What gives you hope moving forward?

A: Even at my lowest point I remember thinking that even if certain treatments for gastric cancer don’t exist now, we will have better options soon. Researchers and scientists are constantly innovating, and great treatments already exist that aren’t mainstream yet.

With so much research happening, I hope that myself as well as others who have this disease will have more options in the future. Better treatments will lead to better outcomes for everyone.