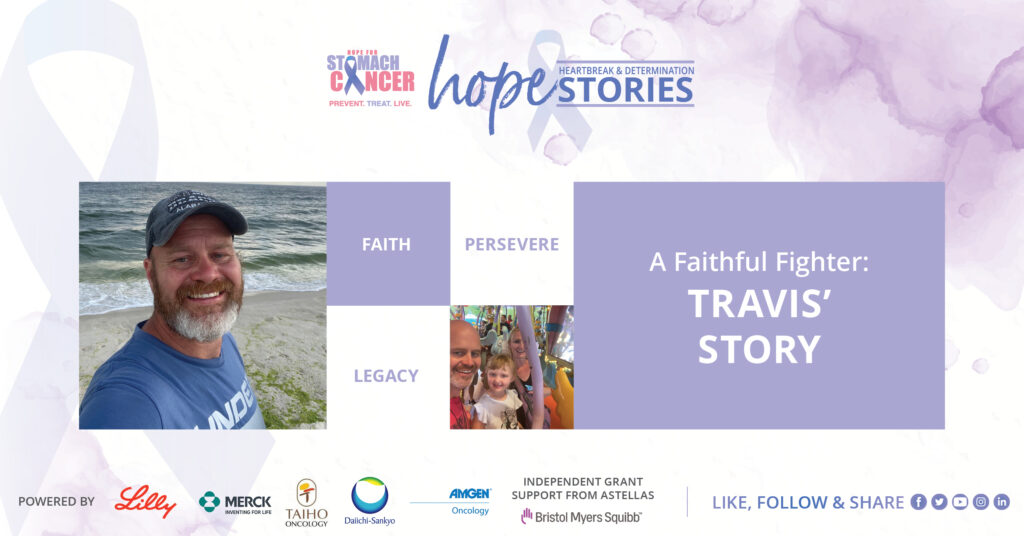 Travis Perry is a stage 4 gastric cancer patient and a married father of four. He has relied heavily on his faith and family throughout his treatment journey. After being part of an IP clinical trial that seemed promising, he recently learned that his cancer came back. He is now looking for other options. 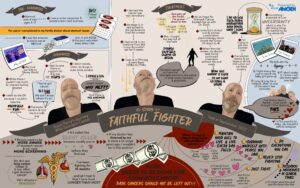 Prior to learning that I had gastric cancer, I led a busy life as a union carpenter and the owner of a lawn care business. I had a full house with four children between the ages of four and 21. For years, I complained to my family about stomach issues. Doctors gave me laxatives and antacid tablets as treatments for reflux. These medications would help temporarily, but the pain would come back even worse when I stopped taking them.

In May 2020, we took our kids to Disneyworld. I couldn’t eat much during the trip and I spent the entire vacation feeling bloated and uncomfortable. I went to an ER because the pain was unbearable.

After various tests and scans, a nurse coldly told me that I had cancer, but they couldn’t tell where it originated yet. Of course, I was stunned – I was there all alone, and I had no support. I wondered, “why me?” I don’t do drugs, smoke, or even drink alcohol, so I was shocked to learn that I had such a serious illness.

Further testing revealed that the gastric cancer had no hereditary component. This was good news since I have children. However, we did learn that I was in stage four, and that the cancer had spread to my peritoneum – a rare development for a man.

We found that I had a kink in my intestine, which prevented me from eating normally for five weeks. I had to have an IPN bag, and I rapidly dropped from 230 pounds to 175. It was a dark time that brought me to my knees physically, mentally, and spiritually.

Given my late-stage diagnosis, I needed to start treatment as soon as possible. Aki at Hope for Stomach Cancer got me hooked up with Dr. Jeremy Davis at the NIH, who helped me enroll in a clinical trial. I used a combination of chemotherapy and experimental treatment in the trial that shrank the tumor from 16 cm down to 4cm.

Sadly, my fight didn’t end there. I was stable for awhile, but the tumor emerged again. I am back on chemotherapy so that I can hopefully crush this tumor once and for all. Mentally, I try to stay positive, but it’s a struggle to go to bed each night wondering how much time you have left. My kids are the legacy that keep me going. I fight each day to watch my baby grow up, and I pray for a miracle. I thank God for my wife Abby, who is my strength and caregiver.

My Hope for the Future

Gastric cancer is often considered a silent killer because so many people are at stage four before they even find out about it. There definitely needs to be more awareness and knowledge of this disease.

I’ve been fighting now for 16 months, and that is more time that most patients get in the first place. Looking back, I wish my doctor had listened to my request to do a scope years ago, since I probably wouldn’t be in this position. My hope is that we can raise funds and awareness for this rare form of cancer so that others don’t have to suffer.

Advice to Other Gastric Cancer Patients

Your mindset plays a huge role in your fight against cancer. I make an effort each day to do the things I want, spend time with my family, and maintain my will to live. I surround myself with friends, family, and folks from support groups as much as possible. It’s hard to see others struggling to watch friends pass away from fighting this disease, but we can gain so much from this community.

Finally, I like to participate in clinical trials if I can to help myself and provide valuable insights that could save others in the future.