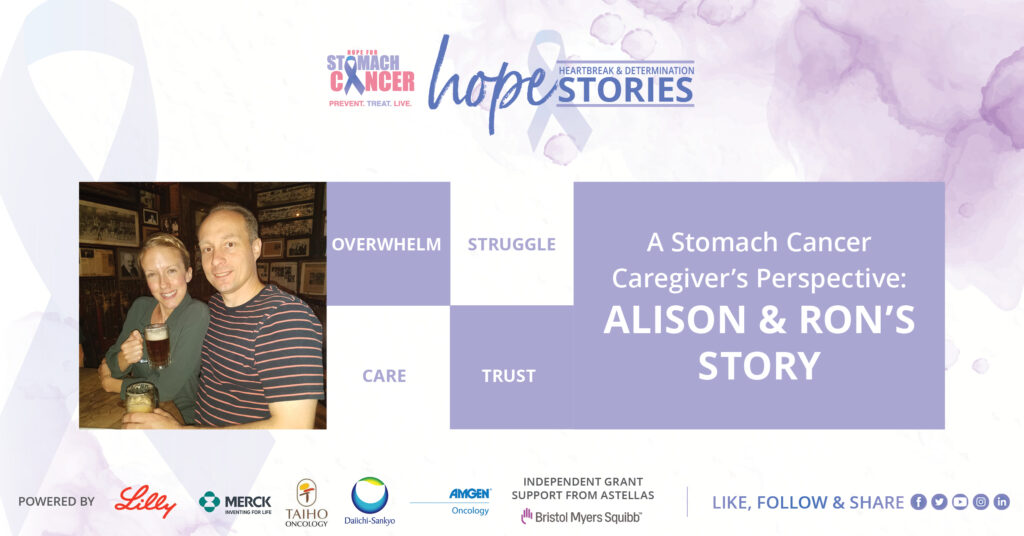 Hope for Stomach Cancer recently caught up with Alison Merle, whose husband Ron is a stage 3 stomach cancer survivor. Together for more than 20 years, this New Jersey-based couple has experienced many highs and lows throughout Ron’s gastric cancer journey. This is their story of inspiration and perseverance.

Q: Alison, thank you for sharing your caregiver perspective along with Ron’s story of being a stomach cancer survivor. Can you please tell me a bit about the two of you, along with how Ron received his diagnosis?

Ron received his diagnosis on November 11, 2020. Leading up to it, he had a host of classic gastric cancer symptoms – specifically a burning sensation near his ribs and general digestive pains. The doctor performed an endoscopy and some scans, which revealed a 5cm ulcer with moderately diffuse signet ring cancer in the first two layers of Ron’s stomach. He was staged 1b.

His family has a history of cancer that stretches back five generations. In addition to stomach cancer, he has relatives who were diagnosed with colon, rectal, and esophageal cancer. So it wasn’t completely surprising news, although we were alarmed nonetheless. Bloodwork would reveal he has the PALB2 gene which may be the root cause of the cancers in his family.

As a caregiver to a stomach cancer survivor, I act as a gatekeeper when it comes to his diagnosis so as to keep him – and our kids – calm. Ron is a quiet, reserved guy and I don’t want him to be deterred. I know he looks at stats, but I take in as much of the “scary” info as possible and convey it in a manner that’s easily understood by him and our kids, too. For example, when there are scan results, I try to get them first. If there are appointments and treatment options, I list them out and ask questions. If there are clinical trials or new options, I’d explain them to Ron so that we could determine how to proceed. I think this helps him feel better mentally. 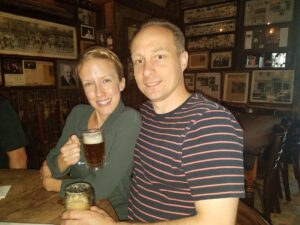 A cancer diagnosis during COVID

It’s worth noting that Ron received this news during the height of COVID-related lockdowns; despite this, Alison was able to attend initial meetings with his oncologists and doctors. However, Ron was alone when he met with his surgeon after his partial gastrectomy in March of 2021. It was then he learned that the initial chemotherapy did not work and his cancer progressed to stage 3b.

While facing the news alone was intimidating, there was the benefit of being together at home as a family during this time. The kids weren’t attending school in person, and Ron and I weren’t leaving the house much, either. It was a silver lining for sure, and we strengthened our bonds as a family during this challenging time. We banded together to support Ron in his journey as a stomach cancer survivor.

Q: I’m sure it was shocking to receive that news. What happened next, and how did Ron’s course of treatment end up looking?

We learned about Ron’s diagnosis at our regional hospital in New Jersey. We traveled to Sloan-Kettering in New York for a second opinion. They advised that Ron should have immediate surgery to have the cancer removed.

Personally, I was interested in Sloan-Kettering’s recommended approach of removing the cancer immediately. His specific variation of cancer is known to not respond especially well to chemo. However, Ron of course made the final decision about what to do. He chose to pursue FLOT treatments with a partial gastrectomy.

Ron had four rounds of FLOT to begin with. He did quite well with these treatments. He experienced fatigue and some pain, with extreme ups and downs in the first 5 or so days. Ron loves to maintain his home and have projects, so he would do “chemo projects” around the house, such as installing outdoor walkway lighting and a window on our front door. After feeling unwell for a few days after a session, he’d rally for a week, then head into the next treatment. Throughout it all, he continued working from home or heading into the office if able, and we proceeded with life as usual.

Ron struggled in particular with the white blood cell booster shots called Neulasta. These important shots inhibit the marrow in your bones to produce white blood cells essential for fighting off infection. Ron says the sensation is like ice shooting through your body. His back and jaw often seized up following the shots.

The surgeon performed Ron’s partial gastrectomy following the four rounds of FLOT. His scans looked good, and he handled surgery like a champ. At first, I visited him in the hospital, and we’d walk short distances through the halls to help him regain his strength. He recovered rapidly, and he was able to come home within three days. He was very excited to be back!

Unfortunately, the stomach cancer hadn’t disappeared with the partial gastrectomy. In fact, it seemed to double down on its growth efforts following the surgery. The cancer rapidly spread, and Ron went from stage one to stage three within a short period of time. We had regrets about his course of treatment. We went for additional opinions and one doctor essentially told us that Ron should go home and enjoy life as much as he could – but Ron was a determined stomach cancer survivor; we were not ready to give up.

He continued with FLOT treatments at this point, and also began an intensive round of radiation treatments. He had 25 treatments in all. They even threw a round of cisplatin in. It was as though doctors were throwing the whole library at him – not just the book, and through it all, he still worked and functioned as normally as he could. Ron was pronounced as clear of cancer after these treatments. It was great news for our family.

Post-treatment, Ron participated in a clinical trial that involved the PADRE vaccine. This vaccine is designed to trigger an immunological response to cancer. The results of this Phase II trial are still unfolding, but we were grateful for the opportunity he had to participate as he was the only gastric cancer patient to do so.

Everything was fine for about 18 months. Sadly, we recently discovered that Ron has had a recurrence of stomach cancer. It appears to be located at the cut line, or the remaining stomach that was left behind following his partial gastrectomy. So, his surgeon is going to remove the rest of his stomach.

Of course, we hope this surgery will be all he needs to remain cancer-free. We won’t know for sure until we receive pathology from his total gastrectomy; but, we have plenty of information from multiple oncologists and with the help of Hope for Stomach Cancer. We are prepared to explore other options, too, like clinical trials and experimental medicines.

Q: Your family has overcome so many challenges already. What gives you hope?

A: My hope is that more funding will become available for stomach cancer research. It’s a lesser-known form of cancer that doesn’t get nearly enough attention. I want there to be standardized treatments for it since FLOT doesn’t seem especially effective – it’s one of the first things I recall reading up on… “signet ring cancer tends to be chemo-resistant”. Also, there is this experimental response to treatment, for example, throwing cisplatin in, then changing course. In short, we need to have more research on targeted treatments.

I want to see immunotherapies and targeted therapies for treating cancer instead of these intense treatments that weaken the body. It’s hard to lead a normal life as a stomach cancer survivor when you’re dealing with such painful side effects.

Advice as a caregiver to a stomach cancer survivor

Throughout it all, I’ve found that you have to remain focused through the process. As every new challenge comes up, it’s easy to fall into despair and to feel overwhelmed, and normal to feel intense fear. We focus on the task at hand. The next task is getting through surgery. Then we get answers. Then we determine the next line of treatment. It helps me to focus on finding solutions.

Along with Ron’s family and my friends, I’ve found a lot of support through social media – I had been off for years, but rejoined because the support groups are incredibly valuable. In closing, one thing Ron has always said to me was “don’t borrow tomorrow’s troubles”. I think that is the most valuable piece of information you can give anyone – caregiver or patient!