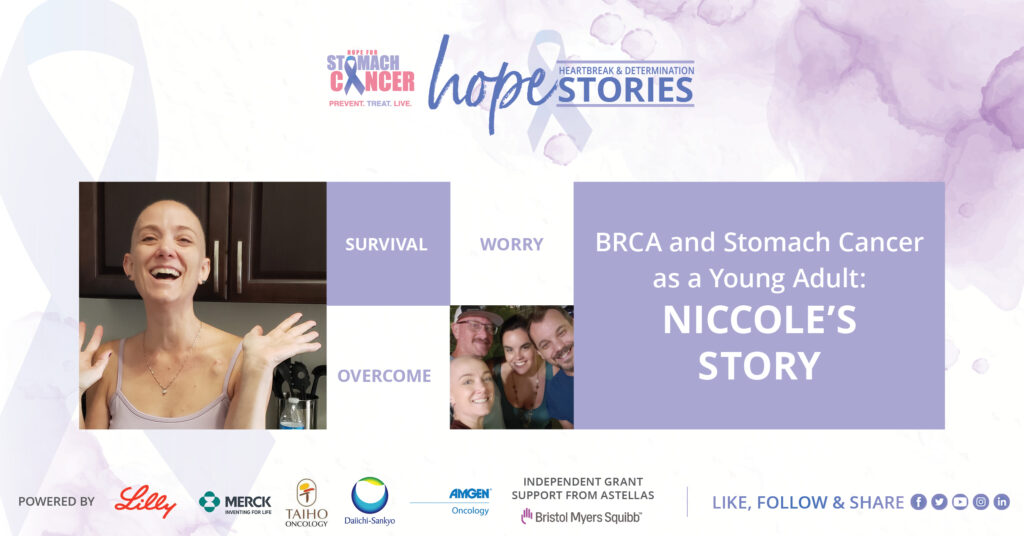 Niccole Branson is a stage three stomach cancer survivor and BRCA mutation carrier from Phoenix, Arizona. After receiving her diagnosis in her late 30s, she underwent eight rounds of chemotherapy, a partial gastrectomy, and 25 rounds of radiation before doctors pronounced her disease-free. This is her inspiring story.

Q: Thank you for telling us your story, Niccole. Can you please give us some background along with the story of how you received your stage three stomach cancer diagnosis? 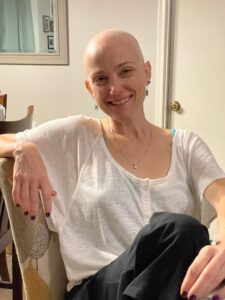 A: I am a Realtor in Phoenix, Arizona. I grew up here but spent years away while living in Minnesota and Wisconsin. In 2021, I began having stomach pain. As many working adults do, I chalked my health issues up to stress from work. But I became alarmed as my symptoms grew more pronounced. I rarely felt hungry, and when I did eat, I felt full almost instantly.

In the mid-spring of 2021, I started having severe acid reflux. I turned to my uncle, a retired doctor, for some advice. He recommended a few over-the-counter drugs that seemed worth trying. Like most medications, these products had guidelines about how long and how often to take them. After ingesting them for multiple days in a row, I stopped using them to be safe.

My acid reflux returned more forcefully than it ever had before. I wasn’t able to sleep in my bed; I had to sleep propped up on my couch because laying flat caused me to throw up.

Turning to a GI for Answers

I spent all of June 2021 feeling very sick. At this point, I still had no idea that I was facing stage 3 stomach cancer, but I was vomiting more frequently than before, and my stomach was highly distended. The bloating was extreme. By July, I could barely get up off of my couch, and I knew I needed help. I had barely gone to the doctor in the past. Luckily, I was able to see a GI doctor without getting a referral first.

Initially, I met with an assistant at the clinic, and I wasn’t very happy with her approach. She immediately wanted me to have an endoscopy. This seemed a bit extreme without trying less invasive tests first.

Later, I returned for an ultrasound appointment with a different clinician. She was perplexed while viewing my scan. “When did you last eat?”, she asked as she moved the transducer over her stomach.

“Nothing, I followed the instructions you gave me to not eat or drink for 12 hours,” was my reply.

She was shocked because my stomach looked completely full. This explained my bloating and “full” feeling.

Next, I met with the GI who convinced me to have the endoscopy. They drained two liters of liquid from my stomach and discovered that I had a large tumor blocking my pyloric sphincter. This explained many of my symptoms: food couldn’t pass this obstruction, so naturally, I was vomiting, getting backed up, and feeling bloated. The doctor ordered a biopsy of the tumor.

Shortly after my first round of scans and tests, I received a phone call from an oncologist. We didn’t have the results yet from my biopsy, and I honestly did not even know what an oncologist was – I had to Google search it. Upon learning that oncologists treat cancer, I had a full-blown panic attack. There was no indication yet that it was cancer. Friends had to come over and calm me down.

In hindsight, it’s clear that my GI doctor was trying to get ahead of the curve. I believe he knew the tumor was cancerous, but he couldn’t tell me that yet without the pathology to prove it. I met with the oncologist and surgeon in early August to discuss options in case the tumor was cancer. On that same day, August 2nd, the doctor gave me my results: it was stage three stomach cancer.

I was slightly prepared to receive this news because of my prior contact with the oncologist. However, it was still crushing. My mom had died of breast cancer when I was seven, so I had some familiarity with cancer. But I had no indication that I’d ever face something as frightening as stomach cancer.

Q: You must have been shocked to receive that news. What did doctors suggest for your course of treatment?

A: After getting my diagnosis, the doctors ordered further testing. They always want to determine if there’s some genetic component to the cancer so that they can determine how to approach it.

I had a shocking revelation at this time. I knew my mom had passed away from cancer, but I didn’t realize that other people in my family had tested for BRCA gene mutations.

These mutations make people more susceptible to breast and ovarian cancers. I learned that some of my relatives who had tested for BRCA gene mutations were positive, and it was surprising that no one in the family ever shared this information with me. Ultimately, I tested positive for the mutation as well.

Now that we knew this information, that would inform the approach that doctors took to my stage three stomach cancer treatments.

Within days of receiving my diagnosis, I had my first chemotherapy treatment. Initially, I did pretty well – my side effects were quite mild. I experienced some cold sensitivity and significant fatigue. Fortunately, I didn’t have mouth sores, nausea, or neuropathy.

I fell into a rhythm where I knew what to expect every 14 days. I’d start the week feeling well while taking steroid pills. Then, I’d have chemo on Tuesdays and do my FLOT treatments at home from Tuesday night to Wednesday. I’d usually feel fine throughout Wednesday, but then the misery would hit on Thursdays and last through the weekend. During these painful stretches, I’d be tired and devoid of an appetite. My boyfriend did as much as he could to keep me eating and comfortable. Normally, I’d start to feel well again by the start of the next week.

I had surgery to remove 80 percent of my stomach on November 4th, 2021. Incredibly, the surgeon told me that my tumor was essentially gone – the chemotherapy had been extremely effective. However, I’d still need 25 rounds of radiation post-surgery just to be safe.

I was in the hospital for five days following the procedure, and I had to adjust to eating with my altered stomach. I started with liquids, progressed to soft foods, and eventually began eating normal foods again. But I quickly learned that I couldn’t eat the same way that I had before. Instead, I had to be very careful about portion sizes, timing, and food selection. Otherwise, my entire body would react badly.

I found that chemotherapy was much more difficult after surgery. During one treatment, I had an allergic reaction to oxaliplatin. My stomach was covered in hives and my throat began to swell. The nurse pumped me full of Benadryl, which quelled the reaction. However, I felt very emotional following that experience. It was honestly terrifying.

I was originally 130 pounds but dropped weight continuously through my treatment. During my last chemo session, I reached a low of 94 pounds. I wasn’t bouncing back as quickly as I could before, and it was truly a struggle to get out of bed and eat. It was especially difficult heading into Thanksgiving, one of my favorite holidays, and being unable to eat. One night, I ate something that didn’t agree with me. Curled up alone in my bedroom, I cried. Everything felt hopeless.

Thankfully, I pulled through this dark time and managed to complete my last round of chemo on March 22, 2022. That felt like a huge accomplishment!

Six weeks after finishing my final chemo round, I had a follow-up appointment that included some scans, bloodwork, and an endoscopy. Thankfully, I was declared disease-free! This was an amazing milestone. My tumor had responded well to the chemo, and I feel relieved now knowing that I’ve beat stage three stomach cancer.

These days, I’m taking Lynparza to reduce the likelihood of recurrence. Further, I’ll visit the oncologist every few months for a while to ensure that I remain cancer-free. I’m looking forward to having a sense of normalcy again in the near future.

Q: Congratulations on being disease-free! What is your hope for the future?

A: My hope is to stay cancer-free. Because of the BRCA gene mutation, I don’t have the standard risk factors that often contribute to stomach cancer. Therefore, my treatment plan will look different than most patients.

However, I have to consider some other factors because of the mutation. It’s possible that I’ll need preventative surgeries to avoid breast or ovarian cancer. I’ll need to make critical decisions to make about these risks in the future.  I am taking Lynparza, which is intended as a maintenance treatment of BRCA-mutated cancer. It is considered experimental at this point because there aren’t a lot of gastric patients that have this as their cancer cause. However, my oncologist is hopeful because there have been great results with other cancers.

Of course, I want to help others as well by sharing my journey. I’d like to get more involved in research, funding, awareness, and anything else I can do to help the stomach cancer community.