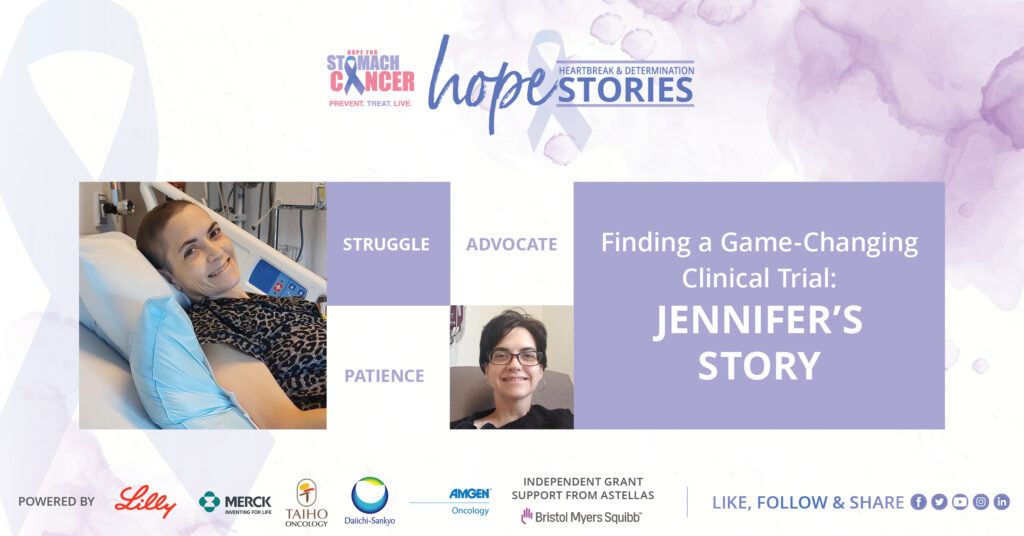 Hope for Stomach Cancer recently spoke with Jennifer Dennis, a cancer fighter who is currently getting treatment for her stage four diagnosis. This Arizona mother of three shares her inspiring story of holding onto hope while facing advanced-stage cancer. 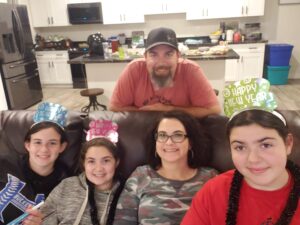 Q: Thank you for speaking with us today, Jennifer. Can you please tell us about yourself along with the story of how you received your diagnosis?

A: I am 42 years old and I live in Buckeye, Arizona. I’m a married mother of three. Around Halloween in 2020, I got sick to my stomach after attending a party. I figured that I’d had too much to eat.

However, throughout that holiday season, I continued to struggle with stomach issues. I frequently felt nauseous and threw up multiple times. There were also strong pains in my stomach and abdomen that would come and go. Figuring that I had a kidney stone, I made an appointment with my doctor. She referred me to a GI, and they conducted an endoscopy and colonoscopy in early 2021.

I received the news about my diagnosis at the beginning of March after the procedures revealed that I had a tumor with cancer cells in my stomach. I was referred to an oncologist and surgeon for further assessment, which is when I learned that I was stage four with peritoneal spread.

Of course, I was shocked at the news. I’d been battling frequent stomach aches, heartburn, and pains, but I could still eat and drink. I worked as a principal, and I recall having a day when I had to lie down in the nurse’s office because I just wasn’t feeling right, something was off. It was hard to tell if it was more pain or nausea, but I definitely was not myself. Other than that, I’d managed my discomfort pretty well. Further, stomach cancer didn’t run in my family, so the diagnosis seemed completely out of the blue.

I was floored and afraid knowing that I had such an advanced diagnosis. But I decided early on that I was a cancer fighter – if there was a way to overcome this disease, I’d figure it out. 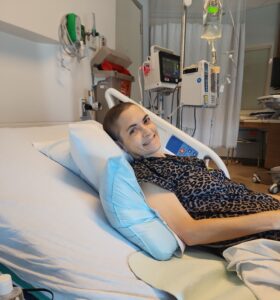 Q: I’m sure that news came as a total shock. What did doctors prescribe as your treatment?

A: My medical team helped me get into a clinical trial that involved eight rounds of FLOT along with HIPEC (Hyperthermic intraperitoneal chemotherapy) treatment and surgery. During this procedure, the surgeon applies super-heated chemotherapy drugs directly in the abdomen to zap the remaining cancer cells.

On March 23rd, 2021, I received my port, and I had my first FLOT treatment on April 1st. I had multiple rounds of FLOT, but sadly, we didn’t see a significant reduction in the tumor within my stomach. I had the HIPEC procedure in September, and then they switched me to FOLFIRI chemo. After this I was no longer a candidate for the clinical trial and surgery was no longer an option.

Frankly, my cancer did not respond well to the initial FLOT treatments. In September, providers told me that my only way forward was chemotherapy. I’m a cancer fighter, and a mom of three, and I have many things I still want to accomplish – I wasn’t willing to give up.

So, I took things into my own hands and discovered a clinical trial regarding Claudin 18.2 CAR T-cell therapy. Basically, this was a clinical trial exploring a treatment for people with solid tumors. In order to qualify, you have to have a specific protein present in your cells. I took some pre-tests and waited to hear my results.

Sadly, they told me that I wouldn’t qualify because my cells tested negative for the protein. I was discouraged, but I immediately began exploring other options to see what I could do.

A month and a half later, I heard from the clinical trial organizers again. Apparently, so many people had tested negative for the proteins that they decided to retest a bunch of samples. Incredibly, I was positive – which meant I got to participate!

My current trial is taking place at UCSD in La Jolla, CA, so I have to travel to take part. The process began with leukapheresis, where white blood cells are extracted from your body. For 6-8 weeks, clinicians “retrained” these removed cells to fight off the claudin 18.2 protein. The idea is that these cells can be reprogrammed to eliminate cancer cells. I also had lympho depletion chemotherapy to bring down my T cells before receiving the CAR T-cell therapy in July 2022.

Due to a blockage I had right before my CAR T-cell, I was weak and sick. My procedure was pushed back nearly a month because of a hospital stay in June. During my two-week CART-cell therapy hospital stay, I had aspiration pneumonia and I still felt quite ill. However, I regained my strength shortly after, and I noticed a night and day difference – my energy was back! 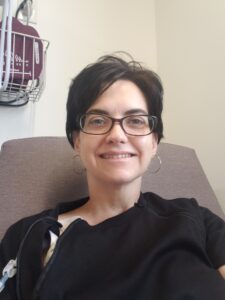 I felt healthy enough that there were days that I actually forgot I had cancer. I’m still on a liquid-only diet due to the blockage, but I’ve managed to maintain my calories and weight. I focus each day on getting the nutrients that I need so that I can maintain my strength and go about my daily life.

Honestly, I’ve been extremely happy with my oncologist and my treatment team overall. But I’ve also discovered that it’s smart to do your own research and explore other options that are available. I’m currently back in La Jolla for another round of this cell therapy. I don’t like being away from my family for a month at a time, but it’s worth it for the excellent results that I’ve had so far.

Q: It’s such fantastic news that the clinical trial worked for you. What gives you hope as a stomach cancer fighter?

A: Moving forward, I hope that clinical trials like the one I’m participating in will reveal a cure for stomach cancer. It’s devastating to be told that you have stage four cancer and that there are few options for recovery. I’m still young and have so much life to live – I want there to be cures to help every stomach cancer fighter out there, regardless of age or background.

Personally, I aim to live a long, full life so that I can see my children grow. I look forward to celebrating 23 years of marriage with my husband this year, and I can’t wait to celebrate more anniversaries with him in the future.