Irasema Chavez is an inspiring survivor of stomach cancer , a recurrence of stomach cancer and breast cancer. She reflects on her experience facing both of these serious diagnoses before the age of 40 without any genetic known mutations. 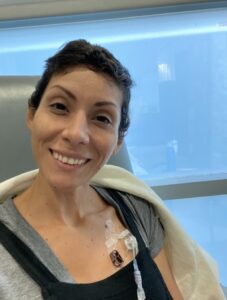 I learned that I had stomach cancer in May of 2015. Leading up to my diagnosis, I had a host of stomach and digestive issues – I was basically living off of Prilosec. When I stopped taking it, my symptoms flared up terribly, and I couldn’t manage. My wife ultimately set up an appointment with a GI doctor on my behalf. He told me that he didn’t like what he was seeing. A healthy, strong 34-year-old with no significant medical history shouldn’t have been suffering the way I was.

We decided to move forward with an endoscopy in hopes of getting answers. The pathology revealed that I had stomach cancer – adenocarcinoma. I was shocked by the news; cancer was the last possibility on my mind.

Once we knew that I was facing cancer, my medical team acted quickly. I had a partial gastrectomy in June 2015 followed by three rounds of chemotherapy, 25 rounds of radiation, and three more rounds of chemo. At the time, this was all that I needed to get my NED (no evidence of disease). Of course, I was thrilled to be cancer-free.

Eight months later, I had a routine endoscopy that revealed my cancer was back. Thankfully, it was localized within my stomach. I went in for yet another surgery. This time, they removed my entire stomach and declared me NED again when my scans were clear after the procedure. 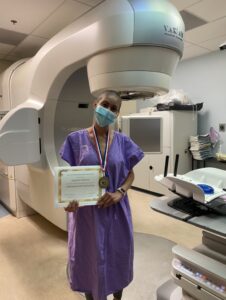 Getting diagnosed with cancer once is life-changing, but receiving the diagnosis twice is practically incomprehensible. I discovered that I had breast cancer in August of 2020 after six years of being cancer-free.

I started an aggressive course of treatment and surgery that included a double mastectomy and reconstructive breast surgery. Since the cancer was invasive, I endured 12 rounds of chemotherapy and 30 radiation treatments. Further, we learned that I was HER2+, so I had one year of targeted treatment. I completed various genetic tests, but nothing indicated that I was predisposed to stomach cancer, breast cancer, or really any form of this disease. I just call myself “lucky” because it’s a complete mystery!

Advice & Hope for the Future

Today, I’m thankful to be doing well physically. These diseases have certainly taken a mental toll, and I’m doing my best to take care of my mind and body. Cancer will always remind you that life shouldn’t be taken for granted.

My hope is that someone who is just starting their stomach cancer journey can take strength from my story. You can still live a full and satisfying life, even without a stomach. I do all the same things that I’ve always enjoyed and I still eat what I love, although I watch my portions. I’m thriving, with or without a stomach!